The majestic building is just right for those who will “inherit the kingdom of God.”

Back in November, Pope Francis blessed a project that he dubbed the “Palace of the Poor,” a refurbished Calasanziane convent dating back to the early 1800s. The palace still carries the name of the Roman family that built it centuries ago: Palazzo Migliori – “Palace of the Best.”

When the nuns and the young mothers they cared for moved to other facilities, Pope Francis personally directed his Almoner, Cardinal Konrad Krajewski, to turn it into a refuge where the homeless and poor of Rome can sleep, eat, and learn.

Find out the incredible backstory to that here:

It’s prime real estate, with its proximity to St. Peter’s — but for those who occupy the four-story, 16-bed facility (there’s room for 50, with possibilities to expand during cold winter months), the snazzy location that tourists would dream of isn’t what’s important.

The Palace of the Poor is entrusted to the lay Catholic Community of Sant’Egidio.

For Sant’Egidio founder Andrea Riccardi, the location is significant — but for spiritual reasons.

Volunteers are using the kitchen to prepare hot meals, distributed in the evenings to the homeless who find shelter at one of Rome’s train stations.

During the day, the bottom two floors provide space for volunteers to teach computer classes. There is also space for reading, recreation, and psychological counseling.

The palace still has the feel of a palace, with its high wooden ceilings and artwork on the walls. That’s just perfect, considering those whom the building is for, says the pope’s almoner.

He noted how the father in the Prodigal Son spared no expense in showing his young son that he was welcome and forgiven.

In the chapel, there is a specially framed medal of Our Lady of Confidence, a gift from employees of the Vatican. Holiday Inn donated the beds for the hostel.

Cardinal Krajewski reported that the renovation was a bit miraculous, but that donations were generous — including, for example, someone simply giving them an elevator.

Media use of the terrace, with its magnificent view of St. Peter’s (a perfect backdrop for filming), will partially help to finance the building, though most of the time, the fresh air and lovely landscape of the roof will be for the palace’s residents.

Women hope their voices are heard at bishops’ family synod 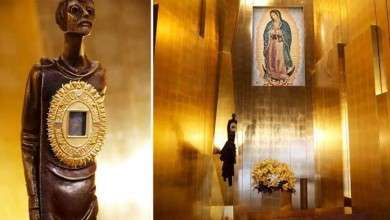 Voices: ‘Our Lady of Guadalupe gave my family a miracle’ 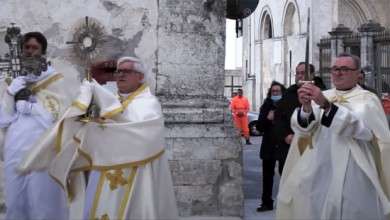 This Italian town raised the sword of St. Michael the Archangel as protection from COVID-19