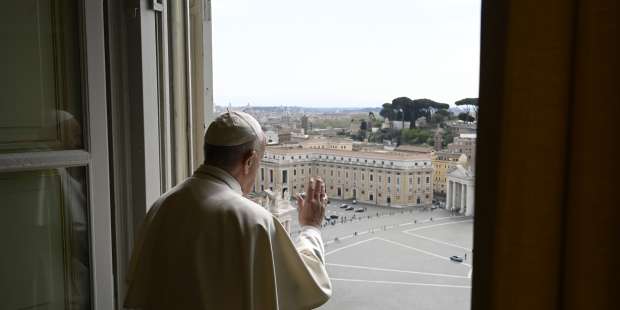 Home » News » Vatican » Pope Francis: Death does not have the last word, life does!

Mary Magdalene and the other Mary went away quickly from the tomb,

and ran to announce the news to his disciples.

And behold, Jesus met them on their way and greeted them.

They approached, embraced his feet, and did him homage.

Then Jesus said to them, “Do not be afraid.

Go tell my brothers to go to Galilee,

and there they will see me.”

At the midday Regina Caeli, Pope Francis reflected on how the women and the disciples were slow to believe, even though Jesus “had foretold a number of times” that He would die and rise again.

They were not ready yet. Their faith needed “to take a qualitative step forward.” Only the Risen Jesus’ gift of the Holy Spirit could have “provoked” them to take that step, Pope Francis explained.

Since then, Peter and many others after him have boldly proclaimed Jesus’ resurrection. That proclamation, the pope said, “has spread everywhere” reaching every corner of the earth. It has become “a message of hope for everyone.”

Jesus’ resurrection tells us that death does not have the last word, life does!

This is why our outlook can be hopeful amid life’s most difficult and uncertain moments of life, Pope Francis assured. “This is the Easter message that we are called to proclaim with words, and above all through the witness of life.”

“In our homes and in our hearts, may this joyful news resound: ‘Christ, my hope, is arisen!’”

Concluding his remarks before reciting the Regina Caeli, Pope Francis invoked Mary, the “silent witness” of Jesus’ death and resurrection. He asked her to help us believe in the “mystery of salvation” that, when “welcomed with faith, can change our lives.”

It is this Easter wish that renews everyone. I entrust it to You, our Mother, whom we now invoke with the prayer, the Regina Caeli.

After reciting the Regina Caeli, Pope Francis continued reflecting on how women are contributing during the coronavirus crisis.

“I would like to call to mind the efforts” of so many women, “during this health crisis,” Pope Francis said.

He specifically mentioned women who are “doctors, nurses, members of security forces, and prison guards, employees in stores providing basic necessities… and many mothers and sisters who are confined to their homes with their entire family, with children, the elderly, and persons with disabilities.”

Then he lamented that some are at risk of violence “due to a living situation in which they bear a burden that is way too heavy.”

His prayer for them was that “the Lord might grant them strength, and that our communities might support them together with their families.”

The Pope then turned his attention once again to the crisis. “During Easter Week,” he said, he renews his affection and nearness to all those countries suffering the worst of the crisis. He named  Italy, the United States, France and Spain. “The list is long,” he said. “I pray for all of them. And don’t forget,” he continued, “that the Pope is praying for you. He is near you.”

Before bidding a final farewell, the pope renewed his Easter greetings and invited everyone to “remain united in prayer and in the commitment to help each other as brothers and sisters.”

He then went to the study window where he generally delivers the noon Angelus and Regina Caeli addresses. After looking about the empty square, he blessed the city of Rome.