Pope Francis has been calling for unity for some time. Perhaps it is for this reason he has decided to lead by example.
The Pontiff made history when he stepped into All Saints Church this Sunday in Rome.
He is the first pope to visit a Roman Anglican Church.

But the history-making action did not end there.

Together, Pope Francis and Anglican Bishop Robert Innes stood side-by-side to pray that afternoon.
Bishop Innes welcomed His Holiness and praised him for standing with refugees and migrants.
The two decided to overcome the differences between Catholic and Anglican beliefs, which began in  1534, when England’s King Henry VIII was denied a marriage annulment. He decided he no longer wanted the Catholic Church to be the reigning religion and got a priest to allow him his divorce.
The result was a split from the Catholic Church and her values.
Pope Francis, aware of the great differences between the Church and Anglican beliefs, decided to focus on what each has in common during his homily, where he acknowledged both groups “viewed each other with suspicion and hostility” in the past, but reminded us to be “always more liberated from our respective prejudices from the past.”
His full homily read as follows:
“Dear Brothers and Sisters, I wish to thank you for your gracious invitation to celebrate this parish anniversary with you. More than two hundred years have passed since the first public Anglican liturgy was held in Rome for a group of English residents in this part of the city.

“A great deal has changed in Rome and in the world since then. In the course of these two centuries, much has also changed between Anglicans and Catholics, who in the past viewed each other with suspicion and hostility.
“Today, with gratitude to God, we recognize one another as we truly are: brothers and sisters in Christ, through our common baptism. As friends and pilgrims we wish to walk the path together, to follow our Lord Jesus Christ together.
“You have invited me to bless the new icon of Christ the Saviour. Christ looks at us, and his gaze upon us is one of salvation, of love and compassion. It is the same merciful gaze which pierced the hearts of the Apostles, who left the past behind and began a journey of new life, in order to follow and proclaim the Lord.
“In this sacred image, as Jesus looks upon us, he seems also to call out to us, to make an appeal to us: “Are you ready to leave everything from your past for me?  Do you want to make my love known, my mercy?”
“His gaze of divine mercy is the source of the whole Christian ministry. The Apostle Paul says this to us, through his words to the Corinthians which we have just heard. He writes: “Having this ministry by the mercy of God, we do not lose heart” (2 Cor 4:1). Our ministry flows forth from the mercy of God, which sustains our ministry and prevents it losing its vigour.
“Saint Paul did not always have an easy relationship with the community at Corinth, as his letters show. There was also a painful visit to this community, with heated words exchanged in writing. But this passage shows Paul overcoming past differences.
“By living his ministry in the light of mercy received, he does not give up in the face of divisions, but devotes himself to reconciliation. When we, the community of baptized Christians, find ourselves confronted with disagreements and turn towards the merciful face of Christ to overcome it, it is reassuring to know that we are doing as Saint Paul did in one of the very first Christian communities.
“How does Saint Paul grapple with this task, where does he begin? With humility, which is not only a beautiful virtue, but a question of identity. Paul sees himself as a servant, proclaiming not himself but Christ Jesus the Lord (v. 5). “And he carries out this service, this ministry according to the mercy shown him (v. 1): not on the basis of his ability, nor by relying on his own strength, but by trusting that God is watching over him and sustaining his weakness with mercy.
“Becoming humble means drawing attention away from oneself, recognizing one’s dependence on God as a beggar of mercy: this is the starting point so that God may work in us. A past president of the World Council of Churches described Christian evangelization as “a beggar telling another beggar where he can find bread”.
“I believe Saint Paul would approve. He grasped the fact that he was “fed by mercy” and that his priority was to share his bread with others: the joy of being loved by the Lord, and of loving him.
“This is our most precious good, our treasure, and it is in this context that Paul introduces one of his most famous images, one we can all apply to ourselves: “we have this treasure in earthen vessels” (v. 7). We are but earthen vessels, yet we keep within us the greatest treasure in the world.
“The Corinthians knew well that it was foolish to preserve something precious in earthen vessels, which were inexpensive but cracked easily. Keeping something valuable in them meant running the risk of losing it. Paul, a graced sinner, humbly recognized that he was fragile, just like an earthen vessel.
“But he experienced and knew that it was precisely there that human misery opens itself to God’s merciful action; the Lord performs wonders. That is how the “extraordinary power” of God works (v. 7).
“Trusting in this humble power, Paul serves the Gospel. Speaking of some of his adversaries in Corinth, he calls them “super apostles” (2 Cor 12:11), perhaps, and with a certain irony, because they had criticized him for his weaknesses even as they considered themselves observant, even perfect.
“Paul, on the other hand, teaches that only in realizing we are weak earthen vessels, sinners always in need of mercy, can the treasure of God be poured into us and through us upon others. Otherwise, we will merely be full of our treasures, which are corrupted and spoiled in seemingly beautiful vessels.
“If we recognize our weakness and ask for forgiveness, then the healing mercy of God will shine in us and will be visible to those outside; others will notice in some way, through us, the gentle beauty of Christ’s face.

“At a certain point, perhaps in the most difficult moment with the community in Corinth, the Apostle Paul cancelled a visit he had planned to make there, also foregoing the offerings he would have received from them (2 Cor 1:15-24).
“Though tensions existed in their fellowship, these did not have the final word. The relationship was restored and Paul received the offering for the care of the Church in Jerusalem. The Christians in Corinth once again took up their work, together with the other communities which Paul visited, to sustain those in need.
“This is a powerful sign of renewed communion. The work that your community is carrying out together with other English-speaking communities here in Rome can be viewed in this light. True, solid communion grows and is built up when people work together for those in need. Through a united witness to charity, the merciful face of Jesus is made visible in our city.
“As Catholics and Anglicans, we are humbly grateful that, after centuries of mutual mistrust, we are now able to recognize that the fruitful grace of Christ is at work also in others. We thank the Lord that among Christians the desire has grown for greater closeness, which is manifested in our praying together and in our common witness to the Gospel, above all in our various forms of service.
“At times, progress on our journey towards full communion may seem slow and uncertain, but today we can be encouraged by our gathering. For the first time, a Bishop of Rome is visiting your community. It is a grace and also a responsibility: the responsibility of strengthening our ties, to the praise of Christ, in service of the Gospel and of this city.
“Let us encourage one another to become ever more faithful disciples of Jesus, always more liberated from our respective prejudices from the past and ever more desirous to pray for and with others. A good sign of this desire is the “twinning” taking place today between your parish of All Saints and All Saints Catholic parish.

“May the saints of every Christian confession, fully united in the Jerusalem above, open for us here below the way to all the possible paths of a fraternal and shared Christian journey.

“Where we are united in the name of Jesus, he is there (cf. Mt 18:20), and turning his merciful gaze towards us, he calls us to devote ourselves fully in the cause of unity and love. May the face of God shine upon you, your families and this entire community!”

Read: Pope Francis' Address to Muslims in the Central Mosque of Koudoukou in Bangui 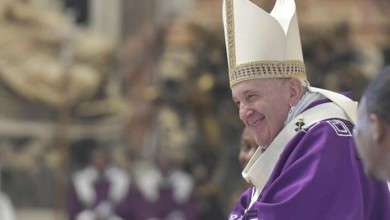