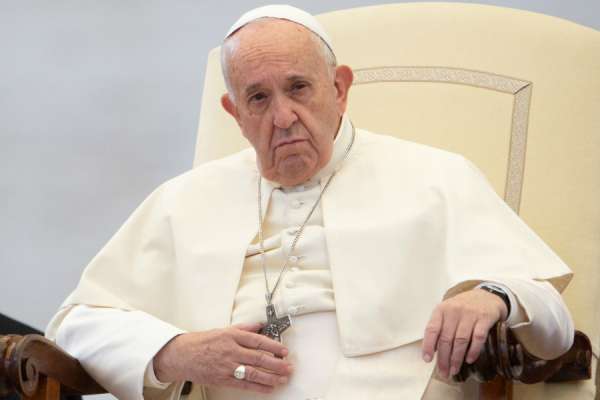 Pope Francis decried the mistreatment of migrants and said that he is shocked by anti-immigration narratives within Europe during a conversation with Jesuits in Thailand published Thursday.

“I must admit that I am shocked by some of the narratives I hear in Europe about borders. Populism is gaining strength,” Pope Francis said in Thailand according to the Jesuit-run journal La Civilita Cattolica transcript published online Dec. 5.

“The Mediterranean has been turned into a cemetery. The notorious cruelty of some detention centers in Libya touches my heart … In other parts there are walls that even separate children from parents,” the pope is reported to have said in a meeting on Nov. 22.

The pope said that migration issues are compounded by a “defensive mindset” that creates a state of fear and makes people believe that “you can only defend yourself by strengthening borders.”

As a result, refugees are treated as “waste material” rather than human beings, he said.

“The phenomenon of refugees has always existed, but today it is better known because of social differences, hunger, political tensions and especially war. For these reasons, migratory movements are intensifying. What is the answer the world gives? The policy of waste. Refugees are waste material,” Pope Francis said.

Francis said that “Herod comes to mind” when he thinks of immigrant children separated from their parents. “Yet for drugs, there’s no wall to keep them out,” he added.

“The Christian tradition has a rich evangelical experience in dealing with the problem of refugees. We also remember the importance of welcoming the foreigner as the Old Testament teaches us,” Pope Francis said.

The pope commended the efforts of religious sisters who work to help victims of human trafficking and prostitution.

Pope Francis met with 48 Jesuits from Southeast Asia in Bangkok’s Shrine of Blessed Nicolas Bunkerd Kitbamrung during his apostolic trip to Thailand and Japan Nov. 19-26.

During papal trips Pope Francis often stops to meet with Jesuits in the region. In the 30-minute meeting in Thailand, the Jesuit priests and seminarians asked the pope about refugees, the environment, prudence, and divorced and remarried Catholics.

The pope encouraged the Jesuits to follow a “little path” of prayer, contemplation of reality, discernment, and action with commitment and courage.

Pope Francis recalled in the meeting a recent encounter with a French missionary who has served in Thailand for 40 years:

“He came to me with about 20 of his parishioners whom he himself had baptized. He also baptized the children of those he had previously baptized: people get married young there, and he was the first evangelizer in that area.”

“I dream of a young Church, very close to the people, fresh,” Pope Francis said.