The Pope said people can ‘sniff out’ priests or bishops who are ‘lying spellbinders’ and ‘narcissists’
Today’s bishops need to be good Samaritans who let their hearts be moved and compelled to help every individual God “accidentally” puts along their path, Pope Francis has said.
“Remember, the road to Jericho is not far” from every church in the world, and “it won’t be hard to encounter someone who waits not for a Levite who looks the other way, but for a brother who draws near,” he told new bishops.
He also said bishops must not get caught up in a game of numbers with vocations, but focus more on quality and forming mature priests, who are not slaves to their personal vices and weaknesses.
Pope Francis met 154 recently appointed bishops from around the world. They were attending a week-long seminar in Rome for new bishops.
In a nearly 40-minute prepared talk, the Pope warned new bishops against using their office to be self-serving, but rather to share the holiness, truth and love of God.
“The world is tired of lying spellbinders and, allow me to say, ‘trendy’ priests or bishops. The people sniff them out – they have God’s sense of smell – and they walk away when they recognise narcissists, manipulators, defenders of their own causes, auctioneers of vain crusades,” he said.
Bishops are leaders God has chosen and entrusted to guide and serve his children, not themselves, the Pope said. Bishops must also remember it is the grace and power of God, not their own, that touches and transforms the world, he added.
In essence, he said, their task is to make God’s mercy “pastoral”, that is, accessible, tangible and readily encountered. To do that, the Pope said bishops need to be able to: fascinate and attract; initiate and guide people; and accompany those in need.
People are attracted to those who show the face of Christ, who never tire of reaching out and show love freely and abundantly, he said.
“A god that is distant and indifferent is easy to ignore, but it is not easy to resist a God who is so close and, moreover, wounded out of love,” he said. “Kindness, beauty, truth, love and the good – look how much we can offer this pleading world, even in cracked vessels.”
The world, he said, needs people who know how to filter out the noise and chaos to hear and discern God’s quiet, humble call.
The Pope urged the bishops to never give up on people despite the confusion in the world. Often, he said, it’s more convenient to just shut it out or “invent bitter speeches in order to justify the laziness that immobilises us in the static sound of vain complaints.”
Initiating or preparing people for God and his “abyss of love” is key, he said.
“Today too much fruit is being demanded from trees that have not been cultivated enough,” he said. Everything needs proper and ongoing preparation, and neglecting that has also resulted in today’s crisis in education and values, “emotional illiteracy,” and a lack of discernment, vocations and peacemaking.
“All of these things require initiation and guided itineraries with perseverance, patience and consistency, which are the signs that distinguish the good shepherd from the mercenary,” he said.
Pope Francis again underlined how important it is bishops be good Samaritans with concrete “palpable” acts of mercy.
So many people need and seek mercy, he said. They know full well they are hurting and “half dead,” so if they sense a merciful soul is passing, they will respond.
“They are fascinated by [mercy’s] capacity to stop when so many walk on by; to kneel when a certain rheumatism of the soul keeps many from bending down; to touch wounded flesh when a preference for everything to be sterile prevails,” he said.
Never forget the “shiver” of love and trepidation felt when God called and still calls you, the Pope told the bishops. It is not necessary to put up a front or “invent a profile” when we have God, “who is greater and does not scorn” what little we have or “become scandalised by our wounds”.
By Carol Glatz 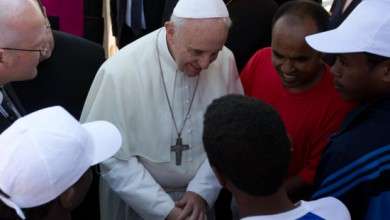 The Church sitting at the exact spot of Christ's Transfiguration robbed? Bishops speak out