Preaching to the faithful gathered for daily Mass in the Vatican’s Saint Martha guesthouse, Pope Francis said during his homily that the embrace of God’s love has the power to silence all our sins, no matter how many. He emphasized on the fact that not all love comes from God but He is the true love.
He focused his reflection from the gospel reading from the letter of John the Apostle, where he reflected on the word ‘love’ and the two most important commandments for a Christian: to love God and to love our neighbor.
At times, he said, we can think real love is the kind we see in soap operas, “but that doesn’t appear to be love.”
For others, love can seem like having a crush on someone, but that feeling eventually fades away, he noted, and asked where the source of true love can be found. Whoever loves has been created by God because God is love. He corrected the wrong notion that: “Every love is God. No, God is love” he said.
Pope Francis noted how the Apostle John provided numerous examples of love in the Gospel, he said, citing the miracle of the five loaves and two fishes and the parable of the Prodigal Son as examples.
“When we have something on our mind and we want to ask God to forgive us, it’s he who is waiting for us – to forgive us,” the Pope said, reflecting on the theme of current Jubilee year of Mercy,he said Mercy is a means of being assured that “our Lord is waiting for us, each one of us.”
The reason, he said, is “to embrace us. Nothing more. To say to us: son, daughter, I love you. I let my Son be crucified for you: this is the price of my love, this is the gift of my love.”
Pope Francis went on to stress how “the Lord is waiting for me, the Lord wants me to open the door of my heart” and we must have this certainty that He will wait for us just as we are and not as we are told to be.
He urged the faithful present at Mass to go to the Lord and tell him how much they love him. If a person feels that they not able or incapable of saying that,the Holy Father encouraged them instead to say: “you know Lord that I would like to love you but I am such a bad sinner.”
He said,when God hears this,he knows you feel remorse and repentant for your sins “he will do the same as he did with the prodigal son who squandered all his money on vices: he won’t let you finish your speech and with an embrace will silence you. The embrace of God’s love.”

Arsonists attempt to set fire to cathedral in Nepal’s capital 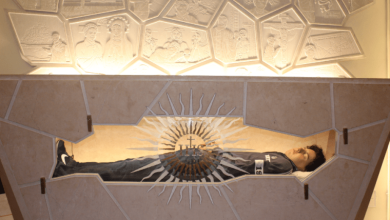 One of the Three Abducted Priests in Kaduna confirmed dead