On the eve of his arrival to Cuba Pope Francis sent a video message to the small island nation, expressing his desire to be a witness of God’s mercy in the country, and to encourage locals to do the same.
“I want to be among you as a missionary of mercy, of the tenderness of God, but allow me also to encourage you to be missionaries of this infinite love of God,” the Pope said in his message.
Broadcast Sept. 17, the Pope’s message was in Spanish, and aired on Cuban television at 8:30p.m. local time in Havana.
Francis is scheduled to visit Cuba Sept. 19-22, where he will meet with the current president, Raul Castro as well as the island’s bishops and Catholic population. He is also expected to meet with former president and older brother to Raul, Fidel Castro.
In the video, Pope Francis said that he is coming in order “to share faith and hope, so that we can strengthen each other mutually in following Jesus.”
The Pope said his message for Cuba was simple, yet important: “Jesus loves you very much, Jesus loves you, but seriously.”
Jesus, he said, “always carries you in his heart; he knows better than anyone what each person needs, what they yearn for, what the deepest desires of our hearts are; he never abandons us and when we don’t behave as he hopes, he always stays by our side, ready to welcome us, comfort us, and give us new hope, a new opportunity, a new life. He never goes away, he is always there.”
Francis then thanked the country for the prayers they have been offering ahead of his visit as the behest of local bishops.
He said one prayer that has brought him a lot of joy is the daily repetition of the children’s prayer: “Sacred Heart of Jesus, make my heart like yours.”
Pope Francis concluded his message by noting how he will visit the Cuban Shrine of the Our Lady of Charity of Cobre, and said that he is going “as a pilgrim, but even more, as a son who wants to arrive to the house of his Mother.”
He entrusted the visit and all Cubans to her care, and asked that they continue to pray for him.
On Sept. 17 Pope Francis also participated in special television program with American and Cuban youth, organized by Scholas Occurrentes as a lead-in to his Sept. 19-17 trip to Cuba and the United States, according to a Sept. 17 communique from the Vatican.
Scholas was founded by Pope Francis while he was still archbishop of Buenos Aires as an initiative to encourage social integration and the culture of encounter through technology, arts and sports.
In addition to hosting two google-hangout sessions with the Pope and youth from around the world, one with special needs children, Scholas also played a key role in organizing Pope Francis’ interreligious soccer match for peace in 2014.
Two different groups of youth participated in the Sept. 17 program with the Pope, one with five students from New York, and the other with five students from different schools in the Cuban capital of Havana.
During the conversation, which was held via satellite connection, the youth expressed their hopes and expectations, while Pope Francis responded, and answered questions posed on various themes.
The program was done in collaboration with The United Nations Children’s Fund (UNICEF), and was filmed by CNN in New York, and by Vatican Radio and the Vatican Television Center on the part of the Pope.
It is scheduled to be broadcast on CNN Friday evening, Sept. 18 at 8p.m. local time in New York.
by Elise Harris
http://www.catholicnewsagency.com/news/pope-francis-will-arrive-to-cuba-as-a-missionary-of-mercy-60664/ 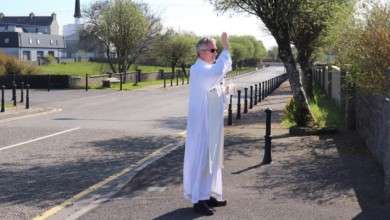 An Irish blessing in the time of pandemic

Synod leader: the Church must include, not exclude