Satan is a specialist in deception, and a cheat who “doesn’t pay well.”

VATICAN CITY — Prayer and humble reliance on the Lord is the strongest weapon against temptation, Pope Francis said this morning, adding that when it comes to spiritual warfare, you can’t dialogue with the devil.Addressing clergy and faithful in his homily at morning Mass, in the chapel of his residence at Santa Marta, the pope called the devil a specialist in deception, who “promises you everything and leaves you naked.”

In the weakness of temptation which we all experience, he said, the key is not to “hide ourselves” from the Lord, but to seek his grace when we are tested and seek his forgiveness should we fall.

The devil uses dialogue to deceive

Temptations lead us to hide ourselves from the Lord, so that we remain with our “fault,” our “sin,” our “corruption.” Commenting on the first Reading from the Book of Genesis, Pope Francis focused on the temptation of Adam and Eve, and then considered that of Jesus in the desert.

In the Genesis account, the devil appears in the form of a serpent: he is “attractive,” and with his cunning he seeks “to deceive.” In this he is a specialist, he is “the father of lies,” “a liar.” So he knows how to deceive and how to “cheat” people. This is what he did with Eve: he made her “feel good,” the Pope explained, and so he began to dialogue with her; and, step by step, Satan led her where he wanted.

With Jesus it is different; it ended badly for the devil, the Pope said. “He tries to dialogue” with Christ, because when the devil deceives a person he does so with dialogue.” He attempts to deceive Him, but Jesus does not give in. Then the devil is revealed for who he is. Jesus answers him, not with His own words, but with the Word of God, because “you can’t dialogue with the devil”; you’ll end up, like Adam and Eve, “naked”:

“The devil is a bad paymaster, he doesn’t pay well. He is a cheat! He promises you everything and leaves you naked. Jesus, too, ended up naked, but on the Cross, through obedience to the Father: this is a different path. The serpent, the devil is cunning: you can’t dialogue with the devil. We all know what temptations are, we all know, because we all have them. So many temptations! Of vanity, pride, greed, avarice… so many!”

Today, the Pope said, there is a lot of talk of corruption; and for this, too, we should ask for the Lord’s help:

“There are so many corrupt people, corrupt ‘big fish’ in the world, whose lives we read about in the papers. Perhaps they began with a small thing, I don’t know, maybe not adjusting the scales well. What was a kilo… no, let’s make it 900 grams, but that will seem like a kilo. Corruption begins in small things like this, with dialogue: ‘No, it’s not true that this fruit will harm you. Eat it, it’s good! It’s a little thing, no one will notice. Do it! Do it!’ And little by little, little by little, you fall into sin, you fall into corruption.”

If you want to be a winner, never hide from the Lord

The Church teaches this, the Pope said, so that we will not be deceived – not to say foolish – so that when we are tempted we have our “eyes open” and know to ask the Lord for help, “because we can’t do it on our own.” Adam and Eve hid themselves from the Lord; on the contrary, it takes the grace of Jesus in order to “turn and seek forgiveness”:

“In temptation, you don’t dialogue, you pray: ‘Help me, Lord, I am weak. I don’t want to hide from you.’ This is courage, this is winning. When you start to dialogue, you end up overcome, defeated. May the Lord give us that grace, and accompany us in this courage. And if we are deceived because of our weakness in temptation, may He grant us the courage to get up and go forward. It’s for this that Jesus came, for this.”

Advice from St. Gregory on how to reject 3 temptations of the devil

Catholics Who Attend Mass Are Divorced Less and Have More Children: USCCB Poll 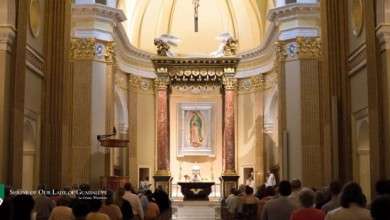