Pope Francis made an unscheduled stop at a clinic this morning to visit and pray for comatose Cardinal Franciszek Macharski, the-89-year-old former Archbishop of Krakow.
Cardinal Marcharski had replaced Cardinal Karol Wojtyla in the post after the latter was elected the world’s first Polish pontiff in 1978.
Bad weather had prompted a last-minute change to the Pope’s travel plans. He had been expected to fly by military helicopter to the Jasna Gora monastery and shrine at Czestochowa but opted to take a car instead.
Although security concerns have accompanied the Pope’s first-ever trip to Eastern Europe, Fr Federico Lombardi, a Vatican spokesman, said iffy skies prompted the decision to drive instead of fly.
The Pope was to celebrate a Mass marking the 1,050th anniversary of Poland’s baptism this morning.
Stanislaw Jarosz, a monk from Jasna Gora, told the Polish news agency PAP that Pope Francis was like Jesus in showing simplicity and an open heart to people. He predicted that the Mass at the shrine, attended by tens of thousands of people, will be the “start of a certain process” of overcoming differences.
In his first speech after arrival in Poland Wednesday, Francis called on Poles to be compassionate and welcoming to those in need, especially refugees. He also met with Polish President Andrzej Duda, whose populist government has virtually slammed the door on asylum-seekers and economic migrants from the Middle East and Africa who are flooding southern European shores.

Bishop Edward Burns: Victims of abuse have helped us see the errors of the past 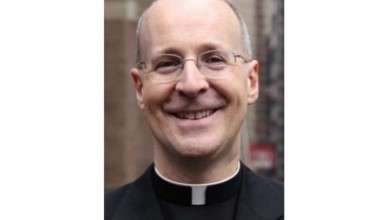 After Chaput warning, bishops weigh in on Fr. James Martin

FATE OF A NATION: Catholics called to prayer as election looms