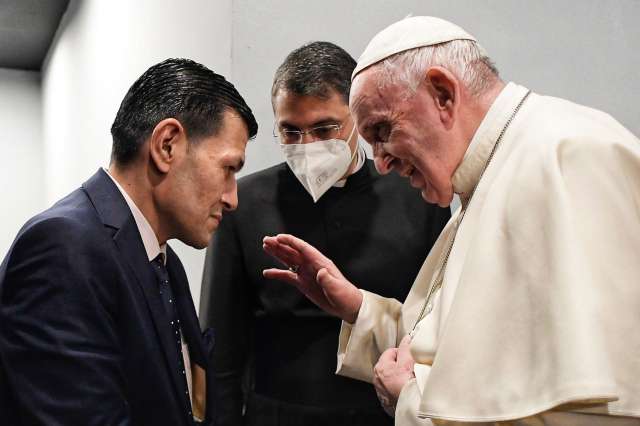 Along conversation took place between Pope Francis and the father of Alan Kurdi, the three-year-old boy who became a symbol of the tragic crossings of migrants in the Mediterranean Sea in 2015. Alan drowned off the Turkish coast together with his mother and brother as they attempted to enter Europe, and his lifeless body was found on the beach.

The photograph of the tiny body lying face-down in the sand was published on international media and shook the consciences of the world.

A statement released by the Holy See Press Office on Sunday revealed that the Pope was able to converse with Mr. Kurdi with the help of an interpreter at the end of the Mass celebrated in Erbil’s Franso Hariri stadium on the third day of his Apostolic Visit to Iraq.

“He was able to listen to the father’s pain for the loss of his family and express his and the Lord’s deep participation in the man’s suffering,” the statement said.

Mr. Kurdi expressed his gratitude to the Pope for his words of closeness to his tragedy and to that of all those migrants who seek understanding, peace and security when they leave their countries at the risk of their lives.

He then gifted the Pope a framed drawing representing his son Alan (visible in the image below).

Alan and his family, Syrians of Kurdish origin, had embarked on a small rubber dinghy, with some 20 other migrants. in the Turkish town of Bodrum.

The boat reportedly capsized near the Greek island of Coo during the night of September 2, 2015. Alan, his brother Galib and his mother were buried together the following day.