By calling Mary Magdalene by name after his resurrection, Jesus shows us just how personal his relationship with mankind is, Pope Francis said Wednesday, adding that after this intimate encounter, Mary then becomes an apostle of hope for the world, announcing the Lord’s rising.
“Mary: the revolution of her life, the revolution destined to transform the existence of every man and woman, begins with a name that echoes in the garden of the empty tomb,” the Pope said May 17.
“How beautiful to think of that the first appearance of the Risen One took place in such a personal way! That there is someone who knows us, who sees our suffering and delusion, who is moved by us, and who call us by name,” he said.
After finally realizing who is speaking to her, Mary would like to run and embrace Jesus, but “he is by now oriented to the heavenly Father, while she is invited to bring the announcement to her brothers.”
“So that woman, who is the first to encounter Jesus…now has become an apostle of the new and greatest hope,” he said.

Pope Francis spoke to pilgrims present in St. Peter’s Square for his weekly general audience. He continued his catechesis on the virtue of Christian hope, focusing on the figure of Mary Magdalene at the tomb.
Mary was the first to arrive at the tomb, he said, noting that she is “one of the disciples who accompanied Jesus from Galilee, putting herself at the service of the early Church.”
The Gospel, he said, describes Mary “a woman of easy enthusiasm,” who after seeing the empty tomb runs back to the apostles disappointed by what she saw.
Her first hypothesis that Jesus’ body had been taken was “the simplest she could formulate,” Francis said, explaining that her first announcement “is not that of the Resurrection, but of an unknown theft, perpetrated while all of Jerusalem slept.”
Then, when she returned to the tomb a second time, her steps are “slow and heavy,” as she is now suffering not only from the death of Jesus, but also because of the inexplicable disappearance of his body.
However, while she is bent over his grave in tears, “God surprises her in the most unexpected way,” the Pope said, noting how the Gospel underlines “how persistent her blindness is,” since she not only didn’t notice the presence of two angels questioning her, but neither does she recognize Jesus, mistaking him for the gardener.
“Instead, she discovers the most shocking event in human history when finally he calls her by name,” Pope Francis said, adding that this personal interest in humanity is something “that we find carved in many pages of the Gospel.”
“Around Jesus there are many people who look for God; but the most marvelous reality is that, long before, there is above all God who is concerned about our lives, who wants to uplift, and to do this calls us by name, recognizing the personal face of each person,” he said.
The Pope stressed that every person has a story of love that God writes for them on earth, calling each one by name.
“He knows us by name, he watches over us, he waits for us, he forgives us, he is patient with us. True or not true?” Francis said, saying “each one of us has this experience.”

Pointing to the joy Mary felt after discovering Jesus had indeed risen from the dead, the Pope said it’s a happiness that isn’t given in small drops, but is rather “a waterfall” that envelops our entire lives.
“The Christian existence is not woven on fluffy happiness, but on waves that engulf everyone,” he said, and encouraged the crowd to place themselves in the Gospel scene, “with the bags of disappointments and defeats that each one carries in their heart.”
In that instant, he said, “there is a God close to us who calls us by name and says: ‘Rise, cease your tears, because I have come to free you!’”
Jesus, he said, is not someone who adapts to the world, tolerating the death, sadness, hatred and the moral destruction of people. Rather, “our God is not inert, but dreams of the transformation of the world, and he realized it in the mystery of the Resurrection,” he said.
Turning to Mary Magdalene, Francis said her example is one of hope, and that her intercession helps us to live the experience of the Resurrection, because “at the time of tears and abandonment, she hears the Risen Jesus who calls us by name, and with a heart full of joy goes to announce: I have seen the Lord!”
This isn’t the first time the Pope has drawn attention to the importance of Mary Magdalene. Just last year, in June 2016, Francis signed a decree bumping the liturgical celebration honoring the Saint from a memorial to a feast, putting her on par with the apostles.
On the Church’s liturgical calendar, saints are honored with either a “memorial” a “feast,” or a “solemnity.” Solemnities rank the highest, with feasts coming in second and memorials in third.
While there are 15 other memorials on Mary Magdalene’s July 22 feast, hers was the only obligatory one to celebrate. After being elevated to the level of a feast, the celebration bears a more significant weight. 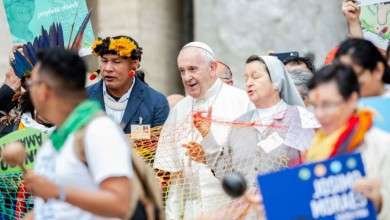