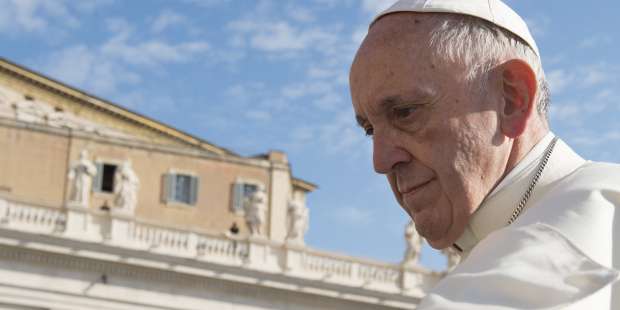 Pope Francis dedicated a series of Wednesday audience addresses to the theme of hope. During one of the audiences in September 2017, he considered hope’s enemies. He offered a “beautiful prayer” for the moments when hope is waning.

The Holy Father began the audience speaking about the Greek myth of Pandora’s Box and how hope has been the virtue that has always brought mankind forward.

Hope is the most divine thing that can exist in man’s heart, he said.

“A French prophet—Charles Péguy—left us stupendous pages about hope,” the pope continued, referring to The Gateway of the Mystery of the Second Virtue.

“He poetically states that God isn’t amazed by the faith of human beings, nor much less by their love; what really fills him with wonder and emotion is people’s hope.

‘The fact that those poor children,’ he writes, ‘see how things are going, and believe that they will be better tomorrow.’”

Pope Francis suggested that never needing to hope for anything is actually a weakness.

“Sometimes, having had everything in life is a form of adversity,” he proposed. “Think of a young person who has never been taught the virtue of hope, nor that of patience, who has never had to sweat for anything, who has grown up too soon and, at the age of 20, ‘knows the ways of the world …’ He has been condemned to the worst sentence: that of not wanting anything anymore. That’s the worst punishment. Closing the door to desires, to dreams. He looks young, but actually, autumn is already taking over his heart. They are the autumn youth.”

Francis also warned that anyone can be subject to temptations against hope, even those on the path of the Christian life.

In this regard, he said, “the monks of antiquity denounced one of the worst enemies of fervor. This is what they said: The ‘noonday devil’ is going to break a life of commitment, precisely when the sun is shining high in the sky. This temptation surprises us when we least expect it: Our days become monotonous and boring, and no ideal seems worth the effort anymore. This attitude is called apathy, and it corrodes life from within, until leaving it like an empty container.”

The pope said that a Christian must fight this apathy. “God created us for joy and happiness, and not for wallowing in melancholic thoughts,” he said. “This is why it is important to take care of our own heart, opposing our tendencies to unhappiness, which surely do not come from God.”

And he gave this advice for when “our energy seems weak and the battle against anxiety is particularly difficult”:

We can always call on the name of Jesus. We can repeat this simple prayer, of which we find traces in the Gospels, and which has become the foundation of so many Christian spiritual traditions:

This is a prayer of hope, because I am turning to him who can open the doors and solve my problems, and make me see the horizon, the horizon of hope.