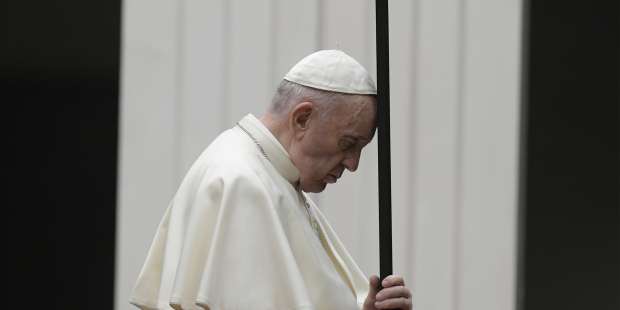 At morning Mass, notes how Christ prays to defend us from worldliness. Mass intention: Those who do the work of mercy of burying the dead.

The pope noted how Jesus often speaks about the world. Francis explained what this spirt of the world, of worldliness, is — “capable of hating, of destroying Jesus and his disciples, and even of corrupting them, and of corrupting the Church.” It is a way of life, he said.

It is a culture, a culture of the ephemeral, of make-up; a culture of ‘today, yes, tomorrow, no, tomorrow yes, today no.’ It has superficial values. It is a culture that doesn’t know fidelity, because it changes according to circumstances, and negotiates everything.

Jesus asks the Father to defend us from this. Worldliness, Francis continued, is a throwaway culture that goes according to convenience. And, the pope lamented, it is a way of life even for many who call themselves Christians but who are worldly. The concerns of the world drown the faith.

The pope recalled 20th-century Jesuit theologian Henri de Lubac, who described worldliness as the worst of evils afflicting the Church. Spiritual worldliness is a way of living Christianity that kills because it hates faith. Worldliness enters everywhere, even in the Church.

Spiritual worldliness is a “hermeneutic of life, a way of life, and also a way to live Christianity. To endure when faced with the proclamation of the Gospel, it hates and kills.” This, the pope explained, is how martyrs are killed because of hatred of the faith, though the majority are killed by worldliness that hates faith. It has “deep roots,” the pope said, and is like a chameleon, “changing according to circumstances, but the substance is always the same: a way of life that finds its way everywhere, even in the Church.”

Worldliness, the pope continued, cannot tolerate the scandal of the cross, and the only medicine against worldliness is Christ who died and rose for us. Victory against the world is faith in Jesus. The foolishness of the cross and the victory of Christ is our victory too, the pope said.

The world hates Jesus, and Jesus prays to the Father to defend us from the spirit of the world.

Nevertheless, Pope Francis clarified, rejecting worldliness does not mean being a fanatic or not being able to dialogue with others.

Let us pray to the Holy Spirit, he invited, in these last days of the Easter season, for “the grace of discerning what is worldly and what is from the Gospel, and not allowing ourselves to be tricked, because the world hates us. The world hated Jesus, and Jesus prayed so that the Father would defend us from the spirit of the world.”