Cardinal Angelo De Donatis: “I’m sharing in the sufferings of so many brothers and sisters

As the pope is bishop of Rome, but also in charge of the universal Church, a cardinal is selected to oversee the daily running of the diocese. Currently, Pope Francis’ vicar for Rome is Cardinal Angelo De Donatis, 66.

On March 30, Cardinal De Donatis, after manifesting some symptoms, was tested for COVID-19, and the result was positive.

He has been interned in the Agostino Gemelli University Polyclinic. He has a fever, but his general condition is good, and he has begun antiviral therapy. His closest collaborators are in preventative self-isolation.

“I too am living this trial, but I’m serene and trusting!” declared Cardinal De Donatis. “I entrust myself to the Lord and to the support of the prayers of all of you, dear faithful of the Church of Rome! I’m experiencing this moment as an occasion that Providence is giving me to share in the sufferings of so many brothers and sisters. I offer my prayers for them, for all the diocesan community, and for the inhabitants of the city of Rome!”

The cardinal is a native of Italy, who was ordained a priest for the Diocese of Rome in 1980.

Starting March 11, Cardinal De Donatis was celebrating a Mass every evening at the Sanctuary of Divine Love in Rome. The Mass was broadcast on the Bishops’ Conference television channel, TV2000, and live-streamed on the Diocese of Rome’s Facebook page.

During the first Mass from the Sanctuary, on the occasion of the pope’s act of entrustment to Mary, the cardinal said that “the antidote, the therapy for the suffering of the present moment, is to entrust oneself to the hands of God. We are in His hands, and no one can tear us away from Him.”

Pope: Mercy is the ultimate and supreme act by which God comes to meet us 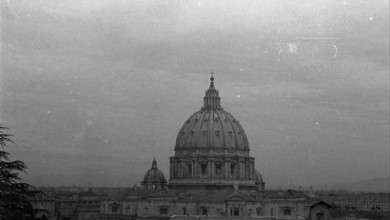