Francis reflects on Parable of Prodigal Son, saying the issue the brothers have is failing to understand what it means to live in the Father’s house.

Contents hide
1 Francis reflects on Parable of Prodigal Son, saying the issue the brothers have is failing to understand what it means to live in the Father’s house.
1.1 The problem

“We continue to pray for all who are ill due to this pandemic,”Pope Francis introduced the Saturday morning liturgy at the Casa Santa Marta. Then he specified his intention for the day:

Today, I would like to ask a special prayer for families: families who from one day to the next find themselves at home with their children because the schools are closed for security reasons and they need to manage a difficult situation, and manage it well…with peace and joy as well.

And in a special way, I think of those families who may have a disabled person among them. The welcome centers for people with disability are closed…. So let’s pray for families, so that they don’t lose peace in this moment and that they might succeed in bringing the entire family forward with strength and joy.

The Gospel of the day, the Parable of the Prodigal Son, so dear to the pope’s heart, was the subject of his homily.

Pope Francis reflected on the words and feelings of two groups of people presented in the Parable of the Prodigal Son: sinners and Pharisees. The Gospel says that the sinners drew near to Jesus to hear him. The sinners “surround Jesus in silence. They don’t know what to say.” But their presence, the Pope said, tells us that they wanted “to listen to Jesus.”

About the Pharisees, the Gospel says they complained and criticized Jesus. They want to take Jesus’ authority away. They accuse Jesus, “He eats with sinners. He’s impure.” The rest of the parable, the Pope said, explains this drama.

The first group “feel the need for salvation…for a guide, a pastor. And so the people draw near to Jesus because they see that he is a pastor.” The doctors of the law, on the other hand, feel animosity toward him.

The doctors feel self-sufficient. ‘I’ve gone to university. I’ve got a doctorate, I have two doctorates. I know very well what the law says.  Actually, I know every single explanation of the law in detail….’  They despise others…they despise sinners.

The son in the parable feels the need to “conquer the world, to get out of the house. Maybe he felt like he was in prison,” the pope reflected. He has the “the audacity to ask his father to give him what he had coming to him.”

His father “doesn’t say anything because he’s a father… ”

“A father knows how to suffer in silence…waiting for the right moment,” Pope Francis noted. “The Father feels pain, tenderness and a lot of love.” At times, this behavior makes fathers look “foolish.” And when that right moment came, the Father was “waiting, he saw him at a distance.” This provokes the elder son to reprove his own father, “you were unjust.” “The older son feels indignant.… Many times indignation is the only way these people feel deserving.”

Pope Francis explained that the problem with these brothers is that they don’t realize what it truly means to live in the Father’s house. The elder son fulfilled his duties and his work, but he never entered into a relationship of love with his Father. Instead, he is indignant with his Father, and says, “This sinner arrived and you throw a party! And me?” He doesn’t even go into the house.

The Father names the problem. “Son you are with me always. And all I have is yours.”

This is what the elder son had never realized. He lived at home as if it were a hotel, without feeling his father’s paternal love…. It’s interesting that the father didn’t say one word about his sin when the younger son returned. He only embraces him and throws a feast.  He had to explain this to the elder son because his heart was hardened because of his conceptions of his Father, about his sonship, and about how he should live.

Pope Francis concluded with a prayer, asking the Lord that we might understand the problem.

The problem is living in the house but not feeling ourselves at home because there’s no paternal or fraternal relationship, but only that of colleagues.

Pope Francis to star in a Film 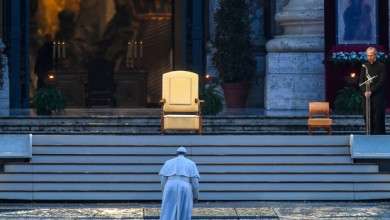