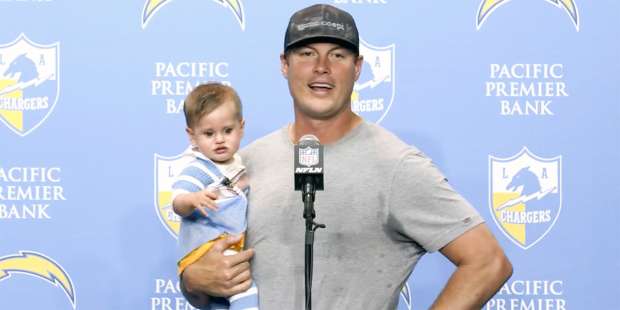 The dad-of-many demonstrated his multi-tasking skills during a post-game chat with the media.

The devout Catholic and quarterback for the Los Angeles Chargers stepped onto the stage after his team’s successful game against the Green Bay Packers, in which they won 26-11. Although the win may have been impressive — and the debrief informative — all eyes were on baby Anna in the strong arms of her football-playing dad, dressed in the team’s colors.

During the conference Anna seemed to familiarize herself with the surroundings and behaved impeccably for a full eight minutes while her dad chatted about the game. The veteran father showed he’s a complete natural as he made the occasional arm swap and got on with his job as if it were just a regular day at work. The result: an adorable daddy-daughter moment.

Anna’s appearance with her dad isn’t overly surprising, as Rivers is known for putting family first. As father to seven girls and two boys, and husband to his high school sweetheart, the football star is setting a great example to dads everywhere on how to be a family man.