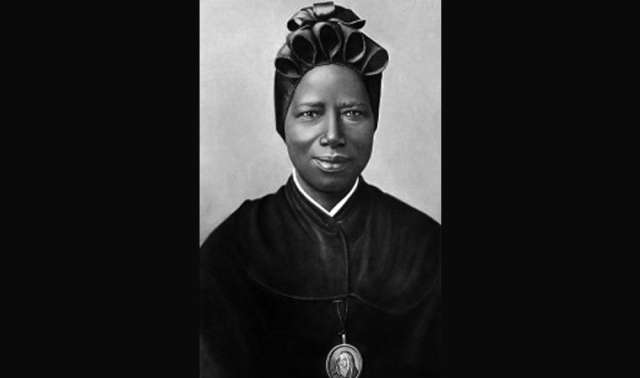 Patron of the Victims of the Human Trafficking. Canossian Daughter of Charity (ca. 1869-1947)

+ Born in Sudan, Josephine Bakhita was kidnapped and sold into slavery when was ten years-old. During her years of enslavement, she suffered unspeakable abuse, so severe that she eventually forgot her given name. “Bakhita,” the name by which she came to be known, is an Arabic word meaning “Lucky.”

+ Purchased by an Italian consul, she was taken to Italy where she converted to the Catholic Faith.

+ She was inspired by the life and service of the Canossian Daughters of Charity and, in 1893, she entered the community, earning a reputation for her piety and charity.

+ Sister Josephine spent the remaining 54 years of her life serving the community and its students in a number of assignments. She willingly forgave those who caused her so much pain, declaring, “If these things had not happened, I would not have been a Christian and a religious today.”

+ Saint Josephine Bakhita died on February 8, 1947, and was canonized in 2000. She is honored as the patron of Sudan.

“After the terrifying “masters” who had owned her up to that point, Bakhita came to know a totally different kind of “master”—in Venetian dialect, which she was now learning, she used the name “paron” for the living God, the God of Jesus Christ. Up to that time she had known only masters who despised and maltreated her, or at best considered her a useful slave. Now, however, she heard that there is a “paron” above all masters, the Lord of all lords, and that this Lord is good, goodness in person. She came to know that this Lord even knew her, that he had created her—that he actually loved her. She too was loved, and by none other than the supreme “Paron”, before whom all other masters are themselves no more than lowly servants.”—Pope Benedict XVI, Spes Salvi

February 8, the Commemoration of Saint Josephine Bakhita, is the Day of Prayer for Human Trafficking. Take time today to pray for the victims of human trafficking and for an end to this form of modern-day slavery. For resources from the United States Conference of Catholic Bishops, visit: http://www.usccb.org/about/anti-trafficking-program/about-human-trafficking.cfm

to the dignity of being your daughter and a bride of Christ,

grant, we pray, that by her example

we may show constant love for the Lord Jesus crucified,

and prompt to show compassion.