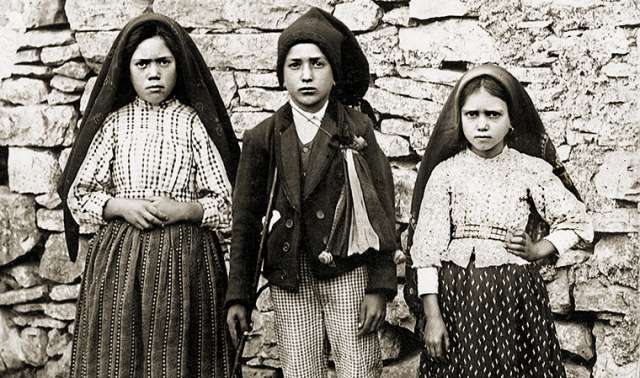 + Francisco was born in 1908 and Jacinta in 1910 near Fatima, Portugal. The brother and sister, children of peasant farmers, spent their days tending sheep with their cousin, Lucia Santos.

+ Friends and family recall that Francisco was the more serious of the two, while Jacinta—who loved nature and music—was more playful and active.

+ In 1917, the three children experienced a series of visions of the Blessed Virgin Mary that were subsequently approved by the Church and which are celebrated today as the apparitions of “Our Lady of Fatima.”

+ In 1918, both Francisco and Jacinta contracted Spanish influenza. Francisco died on April 14, 1919, the day after he made his First Communion. Jacinta lingered for nearly a year, developing pleurisy, which led to a huge abscess in her chest; she died on February 29, 1920.

+ Saint Francisco and Saint Jacinta were canonized by Pope Francis on May 13, 2017, the 100th anniversary of the apparitions they had witnessed. The third Fatima visionary, Lucia, became a Carmelite nun. She died on February 13, 2005, after spending 57 years in virtual seclusion. The cause for her beatification is being actively promoted.

“We can take as our examples Saint Francisco and Saint Jacinta, whom the Virgin Mary introduced into the immense ocean of God’s light and taught to adore him. That was the source of their strength in overcoming opposition and suffering. God’s presence became constant in their lives, as is evident from their insistent prayers for sinners and their desire to remain ever near ‘the hidden Jesus’ in the tabernacle.”—Pope Francis

May the prayer and integrity of the Saints, O Lord, we pray, obtain help for your faithful, that they may gain a share in the eternal inheritance of those whom they celebrate with devotion. Through our Lord Jesus Christ, your Son, who lives and reigns with you in the unity of the Holy Spirit, one God, for ever and ever. Amen.