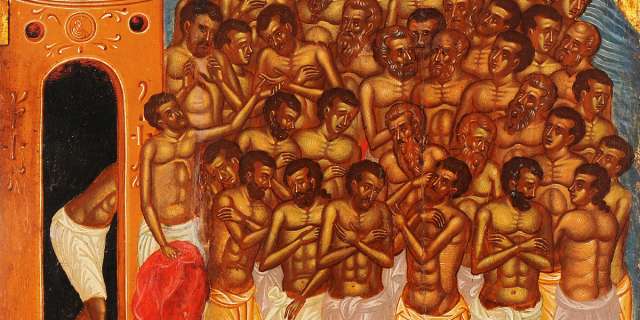 Saint of the Day: The Forty Martyrs of Sebaste (WEDNESDAY, MARCH 10)

Roman soldiers who died for their faith in Christ (d. 320)

+ The Martyrs of Sebaste were a group of Roman soldiers in the Legio XII Fulminata (“Lighteningbearers”) who were killed for their faith near the city of Sebaste (present-day Sivas, Turkey).

+ What we know of their witness comes to us from a homily by Saint Basil the Great, preached on their feast day a few decades later.

+ According to Saint Basil, these solders had openly professed their faith in Christ during the persecution of the Emperor Licinius. They were condemned to be exposed on a frozen pond on cold night, essentially condemning the freeze to death.

+ One of the soldiers denied his faith, but his place was taken by a guard, inspired by the witness of the other martyrs.

+ Devotion to the holy martyrs spread quickly throughout the Church and many churches were built in their honor.

“As gold in the furnace, he proved them,

and as sacrificial offerings he took them to himself.

In the time of judgment they shall shine

and dart about s sparks through stubble.”—Wisdom 3:6-7

May the sight of the great number

of your holy Martyrs gladden us, O Lord,

making our faith stronger and

bringing us consolation by the prayers of them all.

in the unity of the Holy Spirit, God,

for ever and ever.