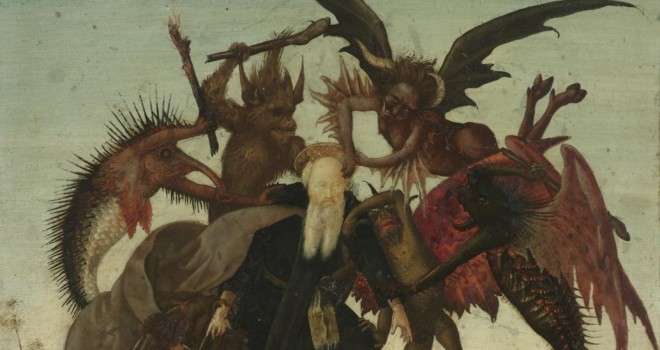 There is a feast day approaching: All Saints. Another celebration, albeit of a different hue, precedes it. All Hallows’ Eve, better known as Halloween, will soon be upon us. We will watch as children are dressed in occult-inspired costumes and taken to parties dedicated to dark supernatural themes; meanwhile, in public places, there will be a sudden proliferation of esoteric signs and symbols.

A counter to this can be found in Saints who Battled Satan: Seventeen Holy Warriors Who Can Teach You How to Fight the Good Fight and Vanquish Your Ancient Enemy (Tan Books) by Dr. Paul Thigpen. Some may remember that Thigpen came to prominence last year with the publication of his Manual for Spiritual Warfare – a modern spiritual classic.  His latest work does not disappoint. In some ways, it is a companion piece to that earlier text. In this latest work, he presents and examines a reading of the last 2000 years that sees history as the confrontation of two armies facing each other in a never-ending enmity, one that shall not cease until time itself ceases.

Why is this book a counter to the events of this approaching season when the forces of darkness are celebrated by the naïve and the initiated alike? Because it speaks of the heroes of that all too real struggle with those dark powers, and even points to the final victory over those forces. These holy warriors featured in Thigpen’s latest work are saints — heroes of the faith; their sanctity consisted mainly in a perpetual war against self. This is the war, in fact, in which all Christians are engaged daily. Nevertheless, there was something else present in the lives of these men and women:  they also had a direct confrontation with another enemy, one who prefers the shadows in his relentless campaign against the children of Eve.

It is through the prism of the war between these opposing camps that Thigpen surveys the last 20 centuries. His examples of those who fought in this battle – seventeen in total – are drawn from the dawn of history to the present day. The first example is Adam and Eve and the lost battle of Eden with its telling reference to the eventual crushing of the Tempter’s head; contrast this with the account of the battle of the last saint featured, Padre Pio, who died as recently as 1968.  It is, in a way, comforting to know that our struggle is the same today as it was in Eden, as it was in the 1st Century, as in the 16th and so on. Fashion and technology may have changed during these years but the supernatural war waged against us has not. It is, therefore, worth examining some of the strategies that these heroic brothers and sisters in the faith employed.

It is also worthwhile remembering that those featured may now be considered saints but, when they fought, they were flesh and blood like the rest of us. As is detailed in the book, these spiritual warriors suffered temptations; they underwent trials; they experienced bewilderment at the predicaments they faced. They also prayed, and trusted, and waited patiently for release from their sorrows. All of this is comforting to those of us still standing, bloodied and wearied upon the same battlefield. And, be in no doubt, it is a battlefield. As the 6th chapter of the book of Job reminds us: Man’s life is a warfare. It always was and always will be. Before picking up Saints who Battled Satan, it would be best have this idea firmly in the forefront of one’s mind, and, more importantly, to have accepted it as fact.

In this world, it goes without saying that saints are signs of contradiction. They inspire and encourage some; for others, however, they pose a mystery that is inexplicable, even bizarre. That is because, in the lives of the saints, we find those who have rejected the world as the last word, preferring, instead, to live for the Eternal Word alone.  Their rejection of the pomp and pride, the luxury and comforts, the glories and riches of this world in preference for the love of the next flies in the face of worldly ‘wisdom’. That would be enough in itself as a example to us, but the lives of some saints point to another reality still, one that many would rather not face: the existence of a personified evil.

It is not the ‘evil’ talked of in the mainstream media – some of which is indeed evil, some of which is nothing of the sort, and some of which is part and parcel of our fallen human nature. No, the evil in these pages is an ancient one. It has a name, or more accurately names. The Devil and his fallen angels are what are presented here, not least in the nicknames that some of the saints have given them, for example, Satan is the burglar (Gemma Galgani), or the pickpocket (Teresa of Avila).  True, the devil is, and always has been guilty of theft, but what is more telling about these names is that they convey a contempt for the self-importance of the evil one that runs counter to the misplaced mythologies that have grown up, from Milton onwards: namely that Lucifer is somehow a tragic figure persecuted by an angry God. He is nothing of the sort. He is rather a demented and dangerous psychopath who will stop at nothing to demean, and then destroy any soul he can ensnare, while all the time driven by an envy that desires nothing but that all share his fate in hell. Hardly a romantic figure, but he is, nonetheless, real.

This is something we need to be reminded of, not least at this time when Halloween can paint an attractive picture of the so-called Left Hand Path. What they don’t tell you is that that same path has a destination, one with no mercy, no love, and no return.

The saints knew this. They also knew that they were engaged in a fight to the death. Some of them were even shown visions of the two armies facing each other as if on a battlefield about to engage in mortal combat. This remains a fight where there can be no prisoners, no quarter asked or given, no surrender – at stake is eternal death or heavenly glory. Knowing this full well, the saints fought valiantly, advancing with the shield of faith as their protection.

Often, the battlefield was the mind. The foe deals in the dispiriting remark, the insinuation, the crude temptation, the lie – these are the stock weapons of those who have rejected truth. They have nothing else. Still, as these weapons are deployed, they hurt the intended target, so too did the blows they inflicted, and sometimes these blows were not just psychological.

One of the more surprising things about this book is its recounting of the physical attacks that some saints endured.  Some even suffered physical injuries – but, thankfully, this appears to be a rare phenomenon. Seemingly, however, the fury of these attacks was provoked by the good that the particular saints were doing for other souls, sometimes unbeknownst to the saints.  Paradoxically, such assaults pointed to victory. Here is the other telling thing revealed in these pages: the army of Darkness may have cunning and deception as part of its arsenal but it lacks self-control. The infernal attacks come from a rage, yes, but an uncontrolled one. In these pages, the actions of the evil one and his legions appear akin to those of a desperate man who knows that his actions are ultimately futile, and with the knowledge that his time is running out.

Thigpen is to be commended for having produced an unusual book that is as intriguing as it is readable. He skilfully weaves the lives of the saints together into a thread that reaches from Eden to the present time; it is a thread signifying spiritual warfare. As Thigpen does so, he makes the reader reflect on the real movement of history in the last two thousand years, exposing a reality sadly neglected even in some contemporary religious circles. In the end, therefore, Thigpen leaves no one in any doubt that there is, in fact, an alternative history – it is not taught in any schools, nor will it be spoken of at any forthcoming Halloween parties, but it is no less real for that.

The saints of the last twenty centuries featured in this book, in the end, triumphed. They died with the badge of honour won on the battlefield despite the persistent attacks of the enemy. They expired and received the victor’s laurel that no one, and nothing, can now remove. They are indeed the blessed ones.

Editor’s note: Saints Who Battled Satan: Seventeen Holy Warriors Who Can Teach You How to Fight the Good Fight and Vanquish Your Ancient Enemy, TAN Books, 2015.  The featured image depicts “The Temptation of St. Anthony,” by Domenico Ghirlandaio.