Buffalo, N.Y., .- New allegations have surfaced that the second whistleblower reporting a cover-up of clerical sexual abuse by the Diocese of Buffalo, Fr. Ryszard Biernat, was sexually abused as a seminarian in the diocese by a priest who was later removed from ministry for other credible accusations of abuse.

A new report by the Buffalo-area news station WKBW reveals allegations by Fr. Biernat that when Biernat was a seminarian he was assaulted by a Buffalo priest at St. Thomas Aquinas parish.

Biernat said in an interview with WKBW that he was assaulted by Fr. Art Smith, a diocesan priest whom Bishop Richard Malone of Buffalo asked to be kept in ministry in 2015 in a letter to Vatican officials, despite the bishop admitting in that same letter that Smith had groomed a young boy, had been accused of inappropriate touching of at least four young men, had faced boundary problems, and refused to stay in a treatment center.

Fr. Smith was suspended in 2018, after the diocese received a new substantiated allegation of sexual abuse of a minor. He denied the accusation that he assaulted Biernat, but told WKBW that he simply told Biernat that he “liked him more than he would ever know.”

WKBW reported that a letter sent by Bishop Malone to the Vatican included Biernat’s allegations.

After Biernat told Bishop Edward Grosz, then-auxiliary bishop of Buffalo, his allegations of assault by Fr. Smith, Grosz allegedly responded by threatening Biernat’s vocation if he kept talking about it.

“He said [it] was my fault because I [didn’t] lock the door,” Biernat quoted Bishop Grosz, as reported by WKBW. “And then he said, ‘and Ryszard, if you don’t stop talking about this, you will not become a priest. You understand me? You understand me?’” Biernat said.

The Diocese of Buffalo did not respond to CNA’s request for comment.

Biernat—currently on a personal leave of absence—eventually became the vice chancellor of the diocese and Bishop Malone’s secretary. On Sept. 4, WKBW reported conversations of Biernat with Malone and others that the priest secretly taped.

The conversations from Aug. 2, 2019 and March 2019 appeared to show that Malone not only knew of allegations made against Fr. Jeffrey Nowak, then-pastor of Our Lady Help of Christians parish in Cheektowaga, but that Malone believed the allegations—months before Fr. Nowak was reportedly removed from ministry.

The allegations were raised by then-seminarian Matthew Bojanowski; the seminarian sent a letter to Bishop Malone detailing his allegations against Fr. Nowak that was dated Jan. 24; Bishop Malone reported on Wednesday that the diocese’s receipt of the letter was on Jan. 28, 2019.

WKBW reported Aug. 7 that the Diocese of Buffalo had removed Fr. Nowak from ministry. At a Wednesday press conference, Bishop Malone said Nowak “was removed from ministry until he would go for that assessment,” but did not say when. On Aug. 28, the diocese announced that Fr. Nowak had been placed on “administrative leave.”

In the conversations, Malone appears to instruct Biernat not to say anything about Nowak, telling him, “[y]ou’re an American citizen you’re free to do what you want. I think we’re gonna blow this story up into something like an atom bomb if we start talking about that.”

Biernat’s lawyer told WKBW that Malone’s comments constituted blackmail, “directly or at a minimum indirectly.” His lawyer Barry Covert did not respond to CNA’s interview request by the time of publication.

Back in March, Malone considered sending Fr. Nowak to an institute for mental health treatment, but acknowledged the difficulty of doing so, saying he could “go ballistic” at the request.

In the recorded conversation on Aug. 2, Malone appeared to acknowledge that it was a “crisis” for the diocese, and that if the news was made public it could spell the end of his tenure as bishop.

“We are in a true crisis situation. True crisis. And everyone in the office is convinced this could be the end for me as bishop,” Malone said in the recorded conversation.

Malone held a press conference Sept. 4 for local reporters selected by the diocese. The bishop said the scandal is a “convoluted matter,” according to WIVB4.

“I’m not a masochist—I’m here because I feel an obligation…to carry on,” the bishop told reporters.

In the press conference, Bishop Malone said that Fr. Nowak first agreed in July to go to St. Luke’s Institute in Maryland for an assessment, but “did not comply.”

In the beginning of August, Nowak again said he would go for an assessment, according to Malone, but again did not go; after the diocese gave Nowak a third opportunity on Aug. 25, he “did not go,” Malone said, “and that is when I put him on administrative leave.”

In the taped Aug. 2 conversation, Malone allegedly said that Fr. Nowak “has agreed by the way to go to Southdown,” an institute for religious and clergy that specializes in mental health and addiction problems. “Cause I told him it’s that or leave of absence,” Malone said according to abridged transcripts of the conversation reported by WKBW.

“I think if we bring Jeff [Nowak] in, that gets very, who knows what he’s gonna do,” Malone said. “Even I know he’s a loose cannon.”

Bishop Malone has been the center of controversy in the diocese for almost a year; in November 2018, his former executive assistant Siobahn O’Connor leaked confidential diocesan documents related to the handling of claims of clerical sexual abuse.

Last month, a RICO lawsuit was filed against the diocese and the bishop, alleging that the response of the diocese was comparable to an organized crime syndicate.

In the Aug. 2 conversation, Malone also referenced his fear of Biernat going public with the news because of the existence of a letter between Biernat and Bojanowski. Nowak, he said in the taped conversations, was jealous of a supposed relationship between Biernat and Bojanowski. Malone called it “a very complex, convoluted matter,” in his Wednesday press conference.

A letter between the Biernat and Bojanowski dated from 2016 was reportedly found by Fr. Nowak in Bojanowski’s apartment, the Buffalo News reported. The letter was reported to be a love letter, which Biernat’s lawyer has denied.

Crux also reported a 2018 real estate transaction under both Biernat’s and Bojanowski’s names.

O’Connor, the 2018 whistleblower, said she believes the letter was between friends and not a love letter, and that it has been circulated to distract from the Fr. Nowak scandal.

“I do not believe it is a love letter. I genuinely believe that it was a letter of friendship, which is a form of love and a very important one at that,” she wrote on her blog on Friday.

Fr. Biernat was counseling Bojanowski on how to get out of an abusive, grooming relationship, O’Connor argued, noting that she talked to Biernat directly about the letter and the house transaction, and that he responded without guile.

“Fr. Ryszard recognized a young man was being groomed by a priest, and he recognized it because it happened to him,” she said, adding that both Biernat and Bojanowski have shared that with her.

Regarding one line in the letter where Biernat wrote Bojanowski, “I am afraid that all that you know about me may compromise your freedom to love or to leave,” he was simply telling the seminarian that he would not stalk Bojanowski if he left the seminary, and would not use his position of influence to do so, O’Connor said.

Biernat shared the news of his house purchase with O’Connor last year, she said, and he was not secretive about it and even conducted the transaction with the help of the diocese’s lawyer. The house had been owned by a family member of Bojanowski’s, she said, and as Bishop Malone was moving to a new residence, Biernat did not want to move with all his belongings with the knowledge that Malone might be retiring soon and he would then have to move again, so he decided to purchase the home with Bojanowski.

Derrick Yearout,a Homeless Man says "Trip to Rome has given him a new outlook on life". 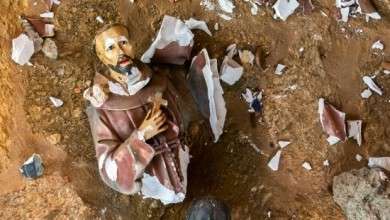