After an extensive local investigation, the Archbishop of Birmingham has welcomed with great joy the possibility that a second miracle attributed to the intercession of Blessed Cardinal John Henry Newman may lead to his canonization. The case involves a Catholic mother who survived a life-threatening pregnancy after praying to Cardinal Newman. Her doctors have affirmed that they cannot give account for her sudden and complete recuperation.
Archbishop Bernard Longley said it was a “great joy” to know that the Cause was making progress.
He said the occasion should also encourage Catholics to recommence their prayers for the canonisation of Blessed Dominic Barberi, who received the Cardinal into Catholicism  from the Anglican Church.
Blessed Cardinal Newman (21 February 1801 S– 11 August 1890) was an Anglican priest who converted to Catholicism at the age of 44. In early life, he was a major figure in the Oxford Movement to bring the Church of England back to its Catholic roots. Eventually his studies in history persuaded him to become a Roman Catholic. . In 1991, Cardinal Newman was proclaimed “Venerable” by the Congregation for the Causes of Saints – the first stage in the canonization process. He was beatified on 19 September 2010 at an open air mass in Birmingham.
“Blessed Cardinal Newman has left an extraordinarily rich spiritual legacy – not least through the two Oratory communities in Birmingham and Oxford – as well as to the Church nationally and internationally,” Archbishop Longley said, “It would be a great joy to see him take a step closer to being named among the saints and would be an encouragement to all who have been inspired by him seek the truth by seeking Christ.”
“At the same time, and especially during this Jubilee Year of Mercy, I am sure that Blessed John Henry Newman would want us to continue praying for the canonization of Blessed Dominic Barberi, the Passionate priest who first enabled him to receive the Sacrament of mercy at his reception into full communion with the Catholic Church at Littlemore in 1845 and who gave him a new insight into the merciful love of God.” he added.
His comments came after a Catholic weekly magazine, disclosed that the Archdiocese of Chicago had conducted an investigation on the mysterious healing of a young mother who continuously prayed to Cardinal Newman with greater determination when she was blighted by a “life-threatening pregnancy.”
Two healing miracles attributed to the intercession of the said person are one of the  prerequisites for discussing sainthood . First miracle – Jack Sullivan, a deacon from Marshfield, Massachusetts in the United States, credited his recovery from a spinal cord disorder to Cardinal Newman. Cardinal Newman was beatified in Cofton Park, Birmingham, by Pope Benedict XVI in 2010 after the Vatican approved the first miracle.The second possible miracle being investigated and passed to the Congregation for the Causes of Sainthood, involves a Catholic mother who survived a life-threatening pregnancy after praying to the Cardinal.
If canonized, he will be the first English saint since 1970 and the first British saint since 1976.

Bishop Philip Egan of Portsmouth said he was convinced that Cardinal Newman would not only be canonized one day but would also be declared a Doctor of the Church because of the wealth and depth of teaching he left behind.
“He was a man whose life and whose heart was absolutely docile to the truth of God and the truth of Christ,” the bishop said.
“He was absolutely under the Word of God and I think that is important to us in an age of relativism and liberalism. Here is somebody led by the truth even if it cost him in his own personal life.”
The teachings of Newman continue to be esteemed throughout the world, Bishop Egan said, adding: “I wonder if we undervalue him in England or don’t fully grasp just how significant he is in terms of the universal Church.”
Bishop Mark Davies of Shrewsbury expressed hope that  saying he hopes England will have a new saint recognized, “a saint whose life and witness was closely connected with such familiar places as London, Oxford and Birmingham.” 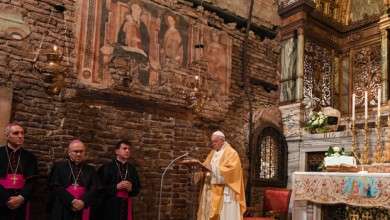 'We will find whoever did this:' Bomb explodes in New York neighborhood