During an exorcism in Italy in 1823, two Dominican priests made the devil acknowledge the dogma that would be declared 30 years later.

Contents hide
1 During an exorcism in Italy in 1823, two Dominican priests made the devil acknowledge the dogma that would be declared 30 years later.
1.1 In Italian:
1.2 In English:

But 20 years earlier, another supernatural and surprising event had already confirmed the Immaculate Conception of the Virgin Mother of God. And the one who declared it was someone we never would have expected to do so. The event is related by Fr. Gabriele Amorth, a late exorcist of the Diocese of Rome.

It was the year 1823. The devil had possessed an illiterate 12-year-old boy, who lived in what is today the Italian province of Avellino, near Naples in southern Italy. Two Dominican priests who were in the city, Fr. Gassiti and Fr. Pignataro, were both authorized by the bishop to perform exorcisms.

The priests asked the demon that was possessing the boy a series of questions—among them, one about the Immaculate Conception.

The devil admitted that the Virgin of Nazareth had never been under his power: not even at the first instant of her life, because she was conceived “full of grace” and fully belonging to God.

Although he may be the “father of lies,” the devil can be forced to tell the truth during an exorcism, even in matters of faith. This was how the two exorcists forced him to pay homage to the Virgin and praise her Immaculate Conception, in verse.

Humiliated, the devil was coerced, in the name of Christ, to sing the glory of Mary, and he did so by means of a sonnet in Italian—perfect in form and in theology!

Here, we present the original in Italian, and then the translation into English:

I am the true Mother of a God who is Son,

And I am his daughter, although his Mother;

He was born from eternity, and is my Son,

I was born within time, and yet I am his Mother.

He is my creator, and is my Son,

I am his creation, and his mother;

It was a divine marvel that my Son

Was an eternal God, who had Me as his Mother.

Our being is almost shared between Mother and Son

Because the Mother received her existence from her Son,

And the Son also received his existence from his Mother.

If, then, the Son received his existence from his Mother,

We either must say that the Son was stained by the Mother,

Or we must say that the Mother is Immaculate. 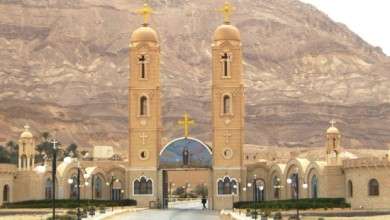 These are the oldest Christian monasteries in the world