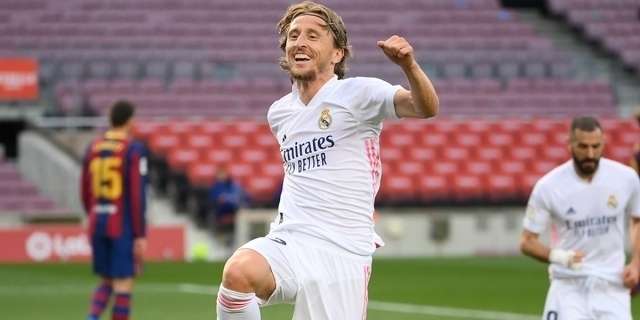 This high-profile athlete honors God and his loved ones every time he’s on the field.

As we see growing attacks on Catholics and Catholic houses of worship—in the USA, France, and Chile, just to name a few recent incident sites—it’s encouraging to remember the example of public figures who aren’t afraid to live their faith in a visible way.

One example from a year ago, which is making the rounds again on the internet, is that of Luka Modrić, a Croatian professional footballer (soccer player, in American terminology) who plays for Spanish club Real Madrid and is the captain of the Croatian national team.

A year ago September, cameras caught him repeatedly kissing his shin pads before entering the field for the second half of a game between his team and Barcelona. He wasn’t thanking his equipment for protecting him; it’s a ritual he often performs, with a much deeper meaning behind it.

The explanation is that on his shin pads, he has a photo of his family and an image of Jesus Christ.

This isn’t the only way he’s shown his devotion to his family; when he won the Golden Ball award in 2018 for “Best Player” in the World Cup that year, he shared how his family helped him to “blossom as a person,” and also said,

In addition, this piece of protective equipment has another very special meaning for him. As Marca.com’s Juan Castro has reported, Modrić comes from a very humble family. His childhood was spent in the middle of the Balkan War. His father was called up by the Croatian army, his grandfather was killed by a group of Serbs near his home, and he and his mother had to flee to Zadar.

There they stayed in a hotel. Through all of this tumult, Modric didn’t stop playing soccer. Even years later, a former receptionist joked that he had broken more glass with his ball than the bombs themselves had.

There he was discovered by Tomislav Basic, head of the Zadar youth academy, who remembers that he made Modric some wooden shin guards (which Basic still has) because his family barely had enough money to survive.

Much has changed since then, even his shin guards, which are now made of carbon fiber. One thing remains the same, however, and that’s Modric’s conviction that the most important things in his life are his family and his faith.