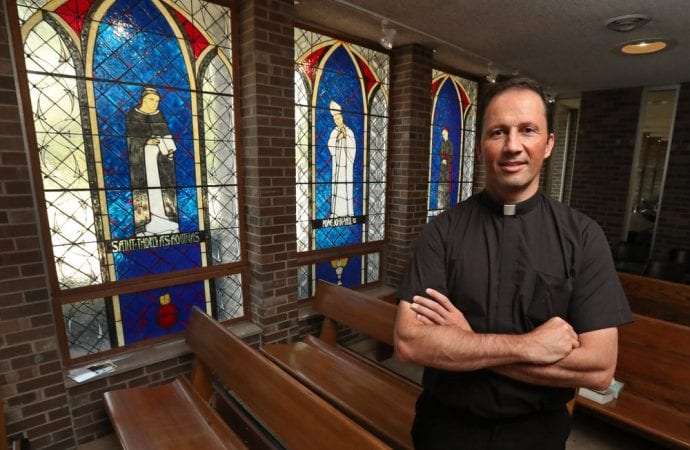 ABERDEEN, South Dakota – Father Tom Hartman’s first call was as a father. His second was as a Catholic priest.

Hartman’s path to the cloth is one he loosely calls his resurrection story. It’s not a resurrection of mortal death, but the ending of one path and beginning of another he’d always felt called to.

He married young. After five years, he and his wife had two children and a change of heart. Hartman speaks about that difficult time with love and respect for himself and his former spouse and with a clarity of hindsight only time can yield. Their relationship began in the early 1990s, and he started working full-time at the family grocery store in Milbank. At that time it was called Bill’s Super Valu. It now goes by Hartman’s Family Foods.

“I was just out of high school thinking I knew everything. I got married to the girlfriend, Becky Johnson. Five years later it ended in divorce,” Hartman told the Aberdeen News by phone. “In that time I realized I didn’t know everything. I really just came back to my faith.”

Now 48, Hartman is the priest for both St. Elizabeth Ann Seton Catholic Church in Groton and St. Joseph’s Catholic Church in Turton. He will also be sacramental minister at the St. Thomas Aquinas Newman Center at Northern State University. The student center has moved away from having a full-time priest to having someone in a part-time ministerial role provide sacraments to the Catholic students.

Hartman, in his decision to divorce, never lost his faith. He’d tell you the opposite happened – it was strengthened.

“There was just a moment in my life before the divorce that I felt it was better to suffer with God than to suffer without him. When the time came I knew I was going to cling to my faith,” he said.

Hartman continued to contemplate romantic love as he worked at his family’s grocery store.

“Basically through those years, as I was dating a little bit, I realized my heart wasn’t called to be with one person, it was called to serve more,” Hartman said. “My heart was a priestly heart.”

So Hartman put his focus on raising his children, and he and his former wife had their marriage annulled in the Catholic faith. It’s a necessary process for a person to have the freedom to enter into another vocation in the eyes of the Catholic Church. For him, it meant the beginning of his path to the priesthood.

The annulment process looks at the beginning of a relationship and how two people came to be married. In Hartman’s case, he and his wife were “really pretty young and stupid,” he said.

An annulment can take time and is easier when both parties cooperate, he said. Hartman considers it a thoughtful process that doesn’t have to be a stigma. It’s given him an experience with what some people he’s met in his new vocation have also had to contemplate. He’s been there and done that, he said. He knows the hurts that come from divorce. He knows that it gets better.

“Maybe the divorced do find it’s alienating. I had many people who would come to me. Sometimes that annulment is scary for people. I can show how it brought healing,” Hartman said. “From that perspective it’s really been beautiful. People do like the fact that I am able to draw on that. It’s probably the greatest gift in that sense.”

The Sioux Falls Diocese made sure Hartman’s children were grown – age 21 or older – and well on their way to successful futures, as well as able to take care of themselves. An adult child with ongoing care needs wouldn’t have allowed Hartman to pursue priesthood.

Son Isaiah Hartman, 28, is a firefighter in Steamboat Springs, Colorado. Daughter Natasha Karels, 27, is teaching in Harrisburg and living in Sioux Falls. Hartman said his son had left for college in Colorado and wasn’t around for some of the major pivots in his father’s life. Karels, who’d lived with her father and then attended college just a hop away in Brookings, felt the transition more intensely.

“For my daughter it was always we will continue to pray about this together,” Hartman said. “Coming through it, in a spiritual sense, she really prayed through it. Her mom, she remarried. So in light of that, I said, ‘With you getting older, this has just freed me up to serve God in this particular way.’”

The children wrote letters to Bishop Paul Swain with their own thoughts and concerns on their father’s possible new vocation. Hartman admitted it can be hard for kids. They can have the expectation that their dad will be there to walk his daughter down the aisle, not perform the marriage ceremony.

“They really took a look to see how my kids are doing,” Hartman said of the diocese. “The Church makes you fulfill your responsibilities. It wasn’t until my daughter was in college that I entered seminary.”

He attended Holy Apostle Seminary in Connecticut. At the school, Hartman met men from all walks of life, many of whom were his age or older. There were widowers, those who’d never married, those who’d had annulments, firefighters, teachers, coaches, doctors and even others who’d had a change in faith. The median age was 41, he said.

He was installed with the local parishes earlier this summer. He spent his first two years as a priest working under another priest, so this is his first time being a lead pastor. He’s taking a thoughtful approach, using this first year or so just to get to know the congregations, their needs and opportunities. He knows Turton is challenged by its remoteness, but it’s also a boon for rural Catholics for miles around who make the regular commutes.

“I’m not in a hurry for any changes. Those first years I want to, as much as I can, feel out how they do things. Then, together, we can decide what is our vision,” Hartman said.

He’s got a heart for youth ministry and missions and would like to take a group to the ski slopes – a favorite pastime – as another outreach possibility.

For someone who eventually chose a decidedly different path than the one he started out on, it’s still those principles of service to others and a responsibility for fellow man that drive Hartman’s passion. He wants it evident in his life that there is a love of God and of neighbor.

“I still consider myself a little bit Grocer Tom. I was always with people,” Hartman said. “I don’t necessarily want to be the office priest. It’s not my forte; I’d rather be out with the people.”