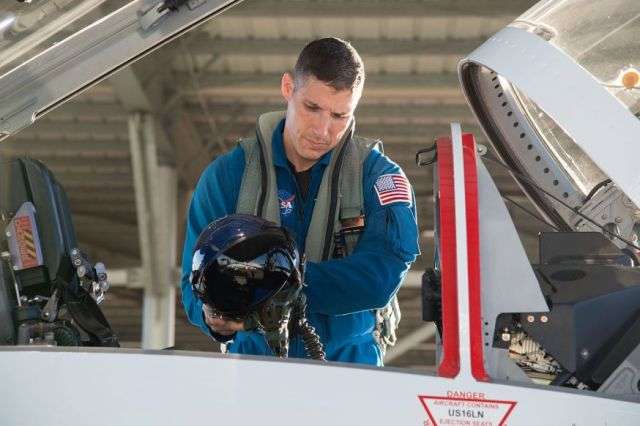 In 2013 NASA astronaut Michael Hopkins got permission to bring Consecrated Hosts into orbit.

On Sunday four NASA astronauts made history with the launch of a capsule built by SpaceX, a privately-owned space exploration company. The 27-hour scheduled voyage to the International Space Station (ISS) is the first operational flight of the Crew Dragon capsule, and could mark the first step towards commercialized space travel.

Astronaut Michael Hopkins and the Eucharist

Commander Michael S. Hopkins and the crew of the “Reliance” spacecraft are expected to dock at the ISS at 11 pm EST on Monday, and remain there for six months. This mission, however, is not the first time Hopkins has made history.

On Hopkins’s first space mission in 2013, he did something no astronaut has done before. He brought along some very precious cargo — a small container or “pyx” containing consecrated Communion wafers.

The Missouri native was a member of a the Expedition 37/38 crew that journeyed to the ISS aboard a Russian Soyuz spacecraft. He was also a recent convert to the Catholic Church. Shortly after being chosen to go on the mission, Hopkins, whose wife and children practiced the Catholic faith, had decided to become a Catholic.

In an interview with the National Catholic Register, Hopkins told Kathleen Naab that after he was confirmed as a Catholic, he contemplated his upcoming six-month long mission and felt that something would be missing.

He regretted that he would have to miss out on what the Catholic Catechism calls the “source and summit of the Christian life,” the Holy Eucharist.

“I started asking the question, ‘Is there any chance I can take the Eucharist up with me into space?’ which isn’t something that, you know, is normally done, since you don’t self-administer Communion,” he told Naab.

With the help of his parish priest and deacon, Hopkins secured permission to take the Eucharist into space.

“So they really did a lot of the leg work to make it happen, and I was able to take a small pyx up with me that had six wafers divided into four each, so I had 24 opportunities to receive Communion on orbit,” he said.

After getting permission from the Russian space agency to bring the pyx onboard, Hopkins, had cleared all possible logistical hurdles, and was able to receive Communion at important moments on the mission.

“There were a couple of times when I received Communion on, I’ll say, special occasions: I did two spacewalks; so on the morning of both of those days, when I went out for the spacewalk, I had Communion. It was really helpful for me to know that Jesus was with me when I went out the hatch into the vacuum of space.

“And then I received my last Communion on my last day on orbit in the ‘Cupola,’ which is this large window that looks down at the Earth, and that was a very special moment before I came home,” he told Naab.

While we have not yet confirmed whether Hopkins was able to bring the Eucharist with him on this mission, we suspect that it was his intention was to do so.

If he did, in fact, bring the Eucharist on board the “Reliance,” the spacecraft will be, in the words of one religious sister who has regularly corresponded with him since his last mission, “a monstrance flying around up there – encircling planet earth!!”

Once the capsule docks at the ISS for its six-month stay, Aleteia hopes to interview Commander Hopkins to relate our inquiries about his “most precious” cargo.