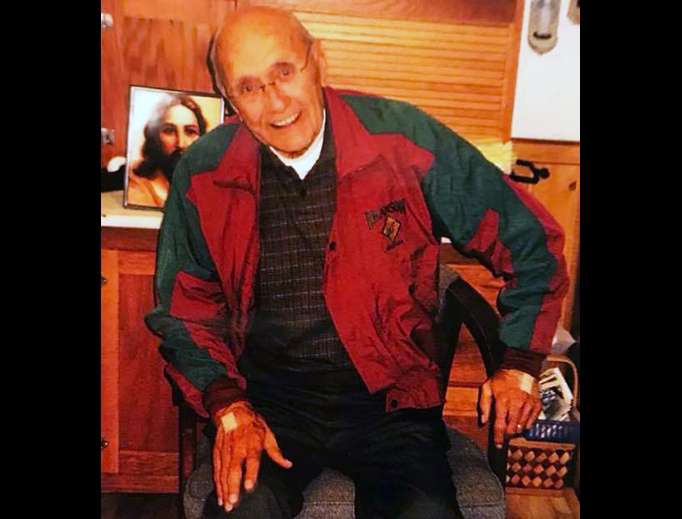 This modest man has touched the lives of tens of thousands.

Twenty-five years ago, Irving C. “Francis” Houle received the wounds of Christ in his hands. He was 67 years old when he received the stigmata on Good Friday, April 8, 1993. With it, he received a heavenly commission and another gift.

Francis Houle was a humble man who didn’t appear out of the ordinary where he lived in Escanaba, Michigan, in the state’s Upper Peninsula. But he had the stigmata for nearly 16 years when he died on Jan. 3, 2009, at age 83.

The local newspaper remembered him as a 1944 graduate of St. Joseph High School who joined the U.S. Army the day after he graduated, served in the European and Middle Eastern campaigns of World War II, like many others, and married his wife, Gail, in 1948 (she survived him); during 60 years of marriage, they raised one daughter and four sons, had seven grandchildren and four great-grandchildren. Houle was also an active fourth-degree Knight of Columbus.

And that other gift? During his years with the stigmata, he prayed over thousands of people who came from around the world.

Go out and touch my children. Your hands are my Son’s hands. Continue to evangelize. Bring back many to the sacrament of penance and to celebrate the Eucharist. You are under the protection of me and my Son, the Blessed Mother told Francis on May 2, 1993.

A month later, on June 8, our Blessed Mother again told him, My beloved Son: I come to you this night to tell you how much your prayers and suffering have meant to my Son and me. Your suffering has been long, my child. You have pleased my Son and me. We will be close to you. The graces have been given to you. Satan is trying to cause confusion among you. But I tell you, he will not succeed. …

You are to pray; use your hands to touch my children. I am your Mother, and I will show you the way. Just trust in Jesus, for he will allow no harm to come to you.

On Aug. 3, Our Lady said to him, I come to be with you this night to take your prayers and suffering to Jesus. It is he who sends me to be with you. My son, there are so few that reach out to the lost children. Please ask my children to go to them and bring them back. … I ask you again to reach out to your brothers and sisters to spread my message which is so important.

Then, on Aug. 18, she advised, Keep your rosaries always with you and continue to pray. Turn to me when you are unsure, for I will give you the help that you need.

Francis Houle obeyed his Mother and her Son. Father Robert Fox, who knew Francis well, estimated the number of people he prayed over at upwards of 200,000. The late Father Fox, who founded the Fatima Family Apostolate and retired by the Shrine of the Most Blessed Sacrament in Hanceville, Alabama, where he would celebrate Mass, wrote a book on the stigmatist, A Man Called Francis.

Father Fox had Francis, as he was usually called, on his 2003 EWTN radio show Reclaiming Your Children for the Catholic Faith. (You can listen to it starting mid-show at about 11:30-11:35.) That interview, the book and a television show bring to light many insights and facts about this most humble of men with a rare heavenly gift.

When he was a young child, Francis actually saw Jesus, although he didn’t know who he was at the time — but he would later always speak glowingly about the divine encounter. Falling from a horse, he suffered near fatal injuries, including broken ribs that punctured his lungs and severe bleeding. The doctor determined Francis was too weak to be operated on. Heeding his parents’ pleas, a nun in the family got all the sisters up to pray for him.

The next morning, the doctor was astonished to find new x-rays showed no ribs puncturing his lungs, no evidence of the punctures and no bleeding. That morning, young Francis asked his mother who the beautiful man in a white robe with upraised hand was who had been standing by his crib in the night. The parents told their bishop, who said, “It must have been Jesus.”

It was Jesus who appeared again to Francis in Lent 1993, before he received the stigmata. Father Fox reported that Jesus told Francis:

My beloved son, I am asking you to prepare yourself … to receive my Holy Wounds. I will be using you in a special way, but I need you to continue to pray. Place your compete trust in me, and do not be afraid of the future, for I will give you the necessary graces to accept this gift. You will be persecuted, as I was persecuted.

I want you to consecrate yourself to my Mother. That way you will become closer to me, for she was blessed above all creatures; but she was hidden during her lifetime by the Holy Spirit. She will look after you and protect you. I am surrounding you with people whom you can trust when you have your difficulties. Go to them, and I will speak to you through them. You will know these people by the peace in your heart. My peace is always with you, my son. Now go and prepare yourself.

Father Fox observed Francis’ suffering a number of times. Francis humbly explained how it began every night, beginning at midnight to 12:30am. The intense pain started on his head, as if thorns were piercing it. “Then it went to my eyes, then all over the upper body, the stomach, the back, the side, the arms. I felt like I was being torn apart,” he explained. His shoulders and elbows felt like they were “being pulled out of their sockets.” The pain in his hands was at times “unbearable,” and his hands sometimes would bleed (doing so regularly on Thursday afternoons and evenings). The intense pain lasted 30-35 minutes. The suffering continued to between 2:30am and 3am.

During this time, God would show him who and what he was suffering for. As Francis told Father Fox, “That one hour and a half or so afterwards — it’s like I am in a different world. All these things are coming to me: the civil wars, the abortion, all the homeless and the sins that one reads about, the murders, the abused children, the abused women: All this comes to me, and I have just such a power to pray, ‘Please Lord, please Lord, stop all this sin …’”

Our Lord reveled to him exact sins, and Francis said, “It usually goes back to sins of the flesh.” He saw the people he suffered for, but not their names.

“There are so many of them,” he revealed. “…They were sinning terribly. Jesus was so sad. Both Jesus and Mary were crying. There were many young men and women in their 20s, on the beach, in the bars, walking the streets.”

One time, he saw Jesus standing at the foot of his bed, looking as he did during the Passion and bleeding. He told Francis, You are to suffer for the conversion of sinners. … Bring my children back to me.

Healing Many Spiritually and Physically

Francis did what the Lord asked, from physical healings to countless people returning to the Church and the sacraments. Priest always heard confessions when he was at a church. Larger crowds would see several priests, with confession lines for each one half the length of a city block. It was common that many of those seeking the sacrament had been away from confession for 20-40 years.

That made Francis happy, because he would say, “I’d rather see that than physical healings, because this is healing of the soul.” Many letters revealed how people were touched and healed. Others made known that the book Father Fox wrote about Francis brought them back to the faith.

“Tens of thousands of people were converted or came back to the Church after being prayed over by him,” Father Fox told an interviewer after Francis died.

Francis prayed for and touched these tens of thousands as Jesus and the Blessed Mother had directed him. He touched them with the wound marks.

Plentiful examples include a wheelchair-bound woman dying of cancer who was not expected to live more than four months. Five months later, the same woman met Francis again; this time, she was healthy and walking. She told him, “I saw tears in your eyes when you put your hands on my head and then on my face. Here I am. There is no cancer.”

In a similar five-month span, an 8-year-old boy suffering with leukemia was prayed for by Francis. The next time the youngster saw him, he was perfectly well.

Many were healed immediately.

On another occasion, Francis visited EWTN. There, “Mother Angelica had Francis pass his hands over the blueprints of the new monastery that was being constructed. Then she asked Francis to pray over all of her Poor Clare contemplative nuns.” Hours after Francis prayed with each individual nun, holding the hand of each, “the nuns were still remarking how their hands smelled like perfume.”

Father Fox recounted how the aroma of perfume was all around Francis the first time they met. He also related how, after a family called Francis to their home to pray for a woman suffering from great depression and sleeplessness, not only was the woman able to fall asleep soon afterward, but her husband returned home and noted that perfume had been sprayed in the house. But none was. Yet everybody noticed the sweet smell.

About this and the same aroma he experienced, Father Fox said, “[T]his was a sign to me of authenticity.”

When Francis met a person who had left the Church, he would tell them what they were missing: “Our Mass and our Eucharist that they walked away from. It’s sad there’s so many today now that haven’t had Christianity or religion in the home.”

Although the Diocese of Marquette didn’t carry out a formal investigation, two bishops of the diocese watched everything vigilantly.

In August 1998, Bishop James Garland wrote to Father Fox after the book came out about Irving Francis Houle. “We had a good visit, and I am very much impressed with Irving’s faith and humility,” the bishop wrote. “I can find no fault with the activity that he is exercising. It seems to be helpful to many people. I was happy to give him my blessing.”

In turn, the next bishop of Marquette, who today is Archbishop Alexander Sample of Portland, Oregon, was quoted as saying Francis “wanted to be in communion with his bishop. He wanted to make sure his bishop approved of what he was doing.”

“He didn’t draw attention to himself,” then-Bishop Sample noted. “He gave the glory to God and not to himself. That was a confirmation for me that he was authentic.”

“He clearly touched the lives of many people,” Bishop Sample added. “He helped many people, and that certainly was a blessing to the Church and to our diocese.”

When he died, the diocesan newspaper carried a lengthy article on him, citing the support of both bishops.

Throughout everything, Irving Francis Houle remained modest and humble. As Father Fox explained, “He never wanted to take credit for anything; he said it all came from God.”