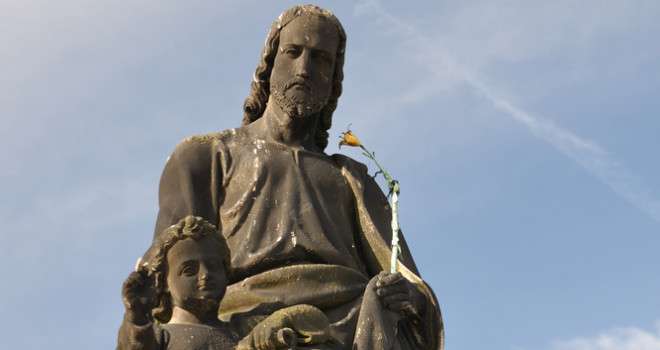 I once heard a priest encourage a group of men with the words, “If you ever feel inadequate as a father, just think of Saint Joseph. He was tasked with leading the Holy Family but he was the only sinner out of all of them.” I’d often contemplated how difficult things were for Mary but I’d never considered the almost impossible task given to Saint Joseph. He was meant to protect the Theotokos, the Mother of God, and then raise the Son of God, the Messiah. Yet Mary was conceived without sin and Jesus was fully divine. They were born equipped for a life of holiness. Joseph, on the other hand, was born with original sin like us. He lived most of his life as a regular craftsman. What could possibly qualify him for this new, challenging vocation?

We know very little of Joseph from Scripture. We know he was a just and kind man. And we know he was from Bethlehem but lived in Nazareth when he became betrothed to Mary. Tradition holds that he was already advanced in age when Jesus was born but this isn’t certain from the Gospel accounts. Tradition also says that Joseph was a carpenter, a wood worker. But the Greek word for his occupation, tekton, means simply a craftsman who worked with wood, stone, or metal. However, very early Fathers of the Church such as Justin Martyr say Joseph was not only a carpenter but specifically a maker of wooden yokes and ploughs, a fitting occupation for the foster father of the man who would become the Lord of the harvest and would call men to his light yoke.

However appropriate the symbolism of Joseph’s career, I doubt this was much comfort when the angel announced God’s plan to him. “Joseph, son of David, do not be afraid to take Mary as your wife; for the Child who has been conceived in her is of the Holy Spirit. She will bear a Son; and you shall call His name Jesus, for He will save His people from their sins.” (Matthew 1:20-21) I know Saint Joseph was a much holier man than I am. Still, I can’t imagine not laughing at the command to not be afraid when it’s followed by an announcement that my wife-to-be is pregnant with the Son of God and Messiah. Few things would fill me with more fear.

If Joseph was afraid, he clearly overcame that fear, taking on the task of father to the most important child in human history. Scripture doesn’t give us a bulleted list of St. Joseph’s fatherly qualities but we can glimpse these in places. We know that Joseph was willing to sacrifice much for his family. His first act upon hearing the news of the Incarnation was to put aside his good name and reputation. He knew that his virtue and judgment would be questioned when others found out about Mary’s pregnancy but he seems to have ignored that for the sake of the child. Later, Joseph put himself last again when, for the sake of his stepson, he left his business and whisked away his family to safety in Egypt.

Scripture also tells us that Jesus’ parents were faithful to their religious obligations. They took Jesus to the temple for his dedication. And they made their pilgrimage to Jerusalem for important festivals. We also know Jesus was extremely well versed in Scripture. He must have grown up in an environment of love for God’s word and dedication to Torah. From this background, the Gospel of Luke tells us, Jesus grew up “in wisdom and in stature” (Luke 2:52).  The “wisdom” Luke refers to is obvious in Jesus’ adult ministry. But what of the “stature”? Luke may simply mean here that Jesus, like all other children, grew taller and developed physically. But I like to imagine the child Jesus helping his father in his workshop, learning to saw and carve, developing an eye for this craft while also gaining strong arms and calloused hands. We do see a hint of this later when an unbelieving crowd ask “Isn’t this the carpenter’s son?”(Matthew 13:55) Apparently, Jesus’ upbringing was so normal that his ministry is quite shocking to those who knew him. Perhaps the crowds might have been less incredulous if Jesus had spent his entire adolescence in the Temple. But, it would seem he instead spent much of his time learning his earthly father’s trade.

From these glimpses in Scripture, we can see that Joseph was a loving and selfless father who was dedicated to his faith, worked hard at his craft, and taught his son these same virtues. No wonder, then, that Saint Joseph is the patron saint of fathers. Of course, there is an irony here in that Joseph was not actually the biological father of Jesus. Yet even that is a lesson this great saint can teach us. Because, even for us with biological offspring, our children are not really ours. They are children of God entrusted to our care. This is why we aren’t meant to merely teach our children to mimic us. We are meant to teach them to pursue their Father in Heaven. This still seems like an impossible task. Yet we can follow the example of St. Joseph. And we can ask his intercession. If Joseph could lead the Holy Family, then surely he can help us lead our own families into holiness.