The House on Tuesday passed a bill allowing states to withhold Medicaid funds from health care providers that perform abortions.
The Women’s Public Health and Safety Act, introduced by Rep. Sean Duffy (R-Wisc.) passed the House largely along party lines in a 236-193 vote Sept. 29. Only two Democrats – Rep. Dan Lipinski (D-Ill.) and Rep. Collin Peterson (D-Minn.) – supported the bill. Nine Republicans voted against it.
Kristen Day, director of the group Democrats for Life of America, told CNA taxpayer funding of Planned Parenthood amounts to “corporate welfare for one organization.”
And Rep. Randy Hultgren (R-Ill.) said that “Given the appalling activities revealed to be occurring at Planned Parenthood clinics, states should have the option to direct tax dollars away from abortion providers like Planned Parenthood and toward comprehensive health care providers,” shortly after the vote.
The bill is another effort by the House to direct Medicaid dollars away from Planned Parenthood, as well as other abortion providers. Planned Parenthood is the largest abortion provider in the U.S. but receives public funding, mostly in the form of Medicaid payments, federal health grants, and Title X funds, a program benefitting low-income Americans.
By law, federal tax dollars cannot fund abortions but can fund other services that Planned Parenthood provides. Pro-life advocates have argued that the money is fungible and frees up resources to perform more abortions.
Over 40 percent of the income of Planned Parenthood affiliates in fiscal year 2013 was public money, according to its records.
The organization has come under fire in recent months after videos were published showing its top doctors casually discussing the transfer of fetal tissue from aborted babies to harvesters for compensation.
One of the series of videos released by the citizen journalist group Center for Medical Progress was a secretly-recorded conversation with a Planned Parenthood doctor, who remarked that sometimes at clinics babies were born before an abortion procedure could be performed. Her remark left open the question of whether or not the babies were given the health care required by law that all born-alive infants who survive abortions must receive.
Although the bill passed the House, it is unlikely the president would sign it into law even if it passed the Senate. The White House announced the other week it would veto another House bill defunding Planned Parenthood.
Although the House successfully voted to strip Planned Parenthood of federal funding in the wake of the controversy, the Senate has failed to do so. Both houses have passed a short-term Continuing Resolution that funds the government through Dec. 11 and continues funding Planned Parenthood. The funding resolution was passed in the House 277-151 on Sept. 30, with a large majority of Republicans voting against it.
The bill passed on Tuesday would direct Medicaid dollars away from abortion providers like Planned Parenthood. It would do so by amending the Social Security Act, which currently orders state medical assistance programs to fund certain services offered by any qualified health care provider.
The bill would give states an opt-out and allow them to set the Medicaid criteria for health care providers that perform abortions. Thus, states could ensure their assistance programs don’t fund abortions, or health care providers that perform abortions, with Medicaid dollars.
“We absolutely support that,” said Kristen Day, speaking for Democrats for Life of America. “Planned Parenthood has really overstated their impact.”
The House vote came hours after a hearing on Planned Parenthood’s federal funding before the House Oversight Committee. The organization’s president Cecile Richards defended Planned Parenthood’s eligibility for Medicaid funds on the basis that their affiliates provide important health services for women like birth control and testing for sexually-transmitted diseases.
Planned Parenthood has also argued that if its funding dries up women will face a health provider shortage.
That claim is not true, Day said, noting that federal community health centers – which provide an array of services including mammograms, but not abortions – could fill the health care gap if Planned Parenthood clinics couldn’t take Medicaid dollars.
“You talk about defunding women’s health care? There is no less money. There is the same amount of money that goes to women’s health care,” Duffy, the bill’s sponsor, stated on the House floor on Tuesday.
Planned Parenthood has also claimed that number of abortions will skyrocket if clinics have to close, Day noted, because women wouldn’t receive preventative care at its clinics.
However in Texas, which blocked state Title X funding of Planned Parenthood in 2012, the number of abortions in 2013 (63,849) continued its yearly rate of decline dating back to 2008 (81,591).
That shows they “either have no impact on the abortion rate” or that the defunding sped up the decline in abortions, Day said of Planned Parenthood.
In fact, in its Sept. 18 vote to defund Planned Parenthood, the House also voted to send an additional $235 million to federal community health centers, Day noted.
That pro-choice Democrats are largely intransigent on defunding Planned Parenthood speaks to their “unwillingness to deal,” she said.
By Matt Hadro
http://www.catholicnewsagency.com/news/stop-corporate-welfare-for-planned-parenthood-pro-life-democrats-say-44350/ 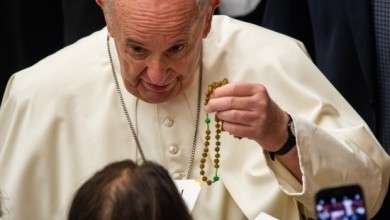 Vatican loans the crozier of St Pope Gregory the Great to the Anglican Cathedral.

Mexican Mayor kills 300 people, who he ordered incinerated in network of ovens

Pope says Syria has become a ‘workshop of cruelty’