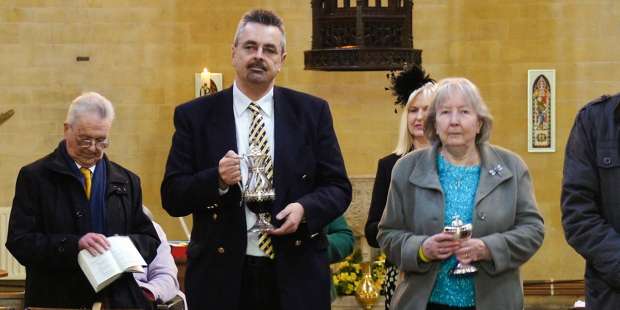 Home » Articles » Symbolism of the offertory procession at Mass

The offering of bread and wine to the priest reminds us to place our own hearts on the altar to be transformed.

When attending Mass on Sunday, typically members of the congregation will be chosen to present bread and wine to the priest while he prepares the altar for the prayers of consecration.

While it may seem at first glance to be a type of intermission, this is in fact a liturgical action with a long history and deep symbolism.

The Catholic Encyclopedia simply states, “Originally at this moment the people brought up bread and wine which were received by the deacons and placed by them on the altar.” Members of the local congregation were normally in charge of baking the bread and acquiring wine, so this served as a practical time within the liturgy for the necessary elements for Mass to be presented.

Nikolaus Gihr in his Holy Sacrifice of the Mass explains part of the symbolism of this act.

In the first place, the oblation (oblatio) relates to the Eucharistic elements: the bread and wine are withdrawn from common use, consecrated to God and previously sanctified, that they may be in a manner prepared and made fit for their unspeakably exalted destiny. We give up all claim to these earthly gifts and offer them to the Most High, with the intention and desire that He would change them in the course of the Sacrifice into the most holy Body and Blood of Christ.

The faithful are encouraged at this time to join the offering in a spiritual way and place our own hearts on the altar, so that we might be transformed in a mystical way into the “body” of Christ.

To partake of this food of God, to sit at this banquet of love, all indeed are invited; but among the attending guests, the honored and preferred are the “poor” in spirit, the humble and the lowly, — in short, all that have emptied their hearts and divested them of the love of the goods of this earth, and who, therefore, hunger and thirst after the imperishable food of heaven. These “poor in spirit will eat” at the table of the Lord and be “filled.”

After the gifts are assembled on the altar, the priest recalls this symbolism in the dialogue that follows.

Priest: Lift up your hearts.

People: We lift them up to the Lord.

Gihr gives us a few more parting words of reflection on this profound action and how our hearts can be transformed at this moment of the Mass.

The heart becomes aglow with holy love of God, and disengages itself from the bonds of worldly inclinations and desires, that enchain it in the dust; it rouses itself from its sluggish indolence and tepidity, that it may with holy ardor soar heavenward with all its powers. “Hearts on high!”