The Amazonian Synod and the papacy of Pope Francis are causing many American Catholics to scratch their head and wonder what on earth is going on. Everything they thought the Catholic Church was seems to be shifting. They thought they had built on the solid rock. Now they feel the house is on shifting sands.

There are many complex reasons for the present turmoil. They are rooted in the history of the church, and not just the last fifty years since the Second Vatican Council. Vatican II was itself the result of an age of revolution and transition in society and the church that had been going on for the last 500 years.

The fact of the matter is, the barque of Peter is sailing through very stormy waters right now, and it takes some courage and lots of faith not to get seasick and not to think you must man the lifeboats or jump overboard and swim for shore.

The reason I produced Triumphs and Tragedies my twenty three part podcast series on the history of the church was so as many people as possible might have an overview of church history and therefore understand where we are today by understanding where we have come from. You can listen to the podcast series here on the blog if you are a Donor Subscriber.

The second part of this is understanding the present trends in society and our wider world in order to understand the pressures on the church today which are helping to create the present upheaval. This is why I produced another podcast series, The Future Church. This ten part series is available here at BreadBox Media. The abridged version of each episode is free at BreadBox. The full length versions are here on the blog for Donor Subscribers.

So what are some of the factors which have brought the church to the present state?

First the factors from the past:

All of these strong currents from the last 500 years have influenced where we are today. Most of us have lived through only the papacies of John Paul II and Benedict XVI. In many ways these two papacies were the end of the age–not only because these two popes saw us through the year 2000 but also because they stood for the old Europe and a Catholic Church that was still Eurocentric.

The study of history makes us realize that the church has always been in the midst of one kind of crisis or another. I encourage you to read more church history or listen to my podcast. You will come to realize that God is working his purpose out in the midst of the crises. His spirit has always been there working in and through the problems–finding new solutions where we least expect them and coming through with a bright future where we could only see a grim forecast.

I believe we are entering a new epoch in the church which will see the completion of the Great Commission. I personally believe there will be a great outpouring of the Holy Spirit bringing multitudes of Muslims to Christ. I think the Asian and African church will rise young and strong. The Africans have not lived through 500 years of religious and philosophical revolution. They still have a strongly supernatural faith. I think the Church of the Middle East will rise again in this epoch as will the church in Eastern Europe. The Church in the Europe and North America will be reduced to a remnant–small but strong–committed and probably persecuted, but tough and resilient for all that.

We are entering a period of transition and change. Buckle your seat belts. It’s going to be a bumpy ride.

But what did you expect when you decided to follow Christ? Did you not hear the words, “I have come to bring fire to the earth and how I wish it were already kindled!”

The Catholic faith is much more than that. It is a religion that will roll with all these challenges, enter into a rollicking struggle and rise smiling and sweating with victory in its teeth.

Is Peter’s boat in a stormy sea? That happened once before is you remember. They were all very afraid, but then the Lord came walking on the waves and said “Peace be with You”

Then he said, “Step out of that boat and come to me walking on the waves.” 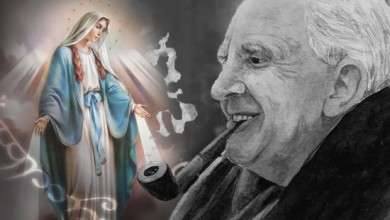 How Specific Must We Be in Confessing Sins?