You’ve heard of Mexico’s “Our Lady of Guadalupe.” But do you know about Peru’s “Lord of Miracles“?

Contents hide
1 Here is the Lord of Miracles image (you can click on any picture to view it full size):
2 Here’s the image in its current location:
3 And here’s pictures of the yearly procession:
4 Do you know of another incredible miracle story that might not be as well-known to the rest of the Church? Share in the comments!

Though it’s not as well-known outside of South America, the Lord of Miracles (or Señor de los Milagros) image is a really big deal for Peruvian Catholics and inspires one of the largest religious processions in the world every year. This is its amazing, supernatural story.

It all starts around the year 1651 in the outskirts of Lima, the most important city in Peru. An African slave painted an image of Jesus on the cross, with the Blessed Virgin Mary and Mary Magdalene, on a wall. Not much else is known about the artist: some sources say his name may have been Benito or Pedro Dalcon, but no one knows for sure.

Then, just a few years later in 1655, disaster struck: a massive earthquake hit the city. Thousands of people died and whole sections of the city were leveled. There was one very notable exception though: the small adobe that had the painting in it was one of the few buildings that was left completely unaffected.

In 1670, a prominent resident of the city was terminally ill with some sort of brain problem. Desperate for help, he visited the image in faith and, miraculously, was healed!

And that’s when things got really weird.

A painter was sent to scrape it off the wall. He started to climb up his ladder but was suddenly overcome with chills and a tremor. He climbed down and people nearby helped to calm him down. He tried to climb up again but had the same problem. He was physically unable to destroy the image.

A second person was sent to the image, but refused to do the job when once he got close. He apparently saw something about the image that changed his mind, but he wouldn’t explain.

Losing patience for what should have been an easy task, the ruler sent a third person – this time, a trained soldier. When the soldier approached the image, the image supernaturally changed before his eyes. He later said it started gleaming and became more beautiful. As a result, he was unable to destroy it.

The crowds demanded that they stop trying to destroy the sacred image, and the local ruler finally relented. He allowed the image to remain and authorized Mass to be celebrated by it. Since then, many other miracles have been attributed to the image, hence its name.

In 1687, another major earthquake hit Lima. Again, the sacred image survived. Devotion to the image had greatly increased, so someone decided to hold a procession with the image. But since it was impractical to process with the wall the image was on, someone made a copy on canvas, which was used instead.

To this day, you can visit the original image on the wall at the Sanctuary of Las Nazarenas in Lima, and the copy on the canvas is still used in a procession every fall. With hundreds of thousands of participants, it is one of the largest religious processions in the world every year.

Here is the Lord of Miracles image (you can click on any picture to view it full size):

Here’s the image in its current location:

And here’s pictures of the yearly procession:

Do you know of another incredible miracle story that might not be as well-known to the rest of the Church? Share in the comments! 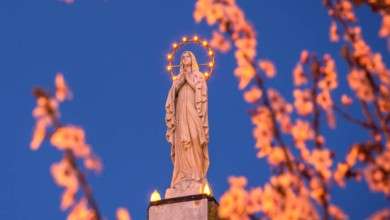 Five Reasons to Believe in the Assumption of Mary