Most people know about the first assassination attempt on St. John Paul II’s life, when he was shot by a Turkish gunman (who may or may not have been working for the Soviet Union) in St. Peter’s Square. It was May 13th, 1981, the feast of Our Lady of Fatima, and the 60-year-old pontiff narrowly survived.

But did you know that John Paul II survived a second assassination attempt a year later, this time a stabbing?

The Spaniard Juan María Fernández Krohn was ordained a priest in Archbishop Marcel Lefebvre’s Society of St. Pius X (better known by the acronym SSPX) in 1978. Concerned about post-Vatican II reforms in the Church, Fr. Krohn became radicalized, convinced that communists had infiltrated the Church and that John Paul II was himself a communist agent bent on destroying the Church. (The concern that John Paul II was a communist is ironic since the first assassination attempt may have been carried out by communists concerned about his opposition to communism.)

Overcome with the prospect of a communist pontiff subverting the Church, Fr. Krohn took matters into his own hands and plotted to assassinate John Paul II.

A year after the first assassination attempt, John Paul II was visiting Fatima, Portugual to give thanks to Our Lady for preserving his life. The day before the anniversary of the attack, on May 12th, Fr. Krohn broke through a security line at Mass with a bayonet and successfully stabbed the pontiff (who had barely recovered from the first attack) before being subdued by security.

John Paul II, however, continued on with Mass like nothing had happened. While checking himself later, though, there was blood, but his wound was small enough that the pontiff decided to simply bandage it up and conceal it. He hid it well enough that it wasn’t even publicly known that Fr. Krohn had actually successfully stabbed him until 2008 when the pontiff’s former secretary told the story in a documentary.

SSPX condemned the attack and said that Fr. Krohn had already left the organization two years earlier (though one source claims they retroactively terminated Fr. Krohn’s membership after the attack in order to save face). Fr. Krohn was put on trial in Portugal and sentenced to six years in prison but only ended up serving three of those before being expelled from the country.

Of course, John Paul II went on to serve the Church for 23 more years (I suppose God had more for him to do!) and is remembered today as one of the greatest popes in Church history. 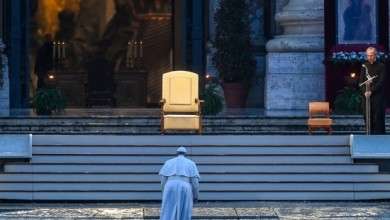