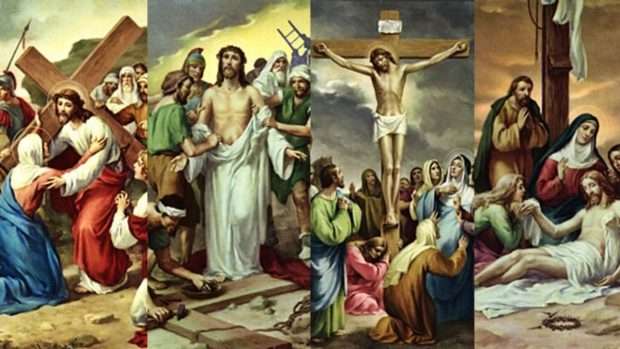 The 14 Stations of the Cross

Good Friday, the day traditionally set aside in the year to remember the death of Jesus on the cross.

Good Friday is one of only two days in the year that Roman Catholics do not have Mass. Instead, on this day, most Catholic Churches say the stations of the Cross (these are normally found pictures around the inside walls of all Churches). In the 12th century, St Francis of Assisi devised the list and started the tradition of reciting it as a type of devotional service. Structurally, Mel Gibson’s 2004 film, The Passion of the Christ, follows the stations. This is the complete list of the 14 stations, as St Francis defined them.

Jesus is condemned to death

Simon of Cyrene helps Jesus to carry his cross

Veronica wipes the face of Jesus

Jesus meets the women of Jerusalem

Jesus’ clothes are taken away

Jesus is nailed to the cross

Jesus dies on the cross

The body of Jesus is taken down from the cross

Jesus is laid in the tomb