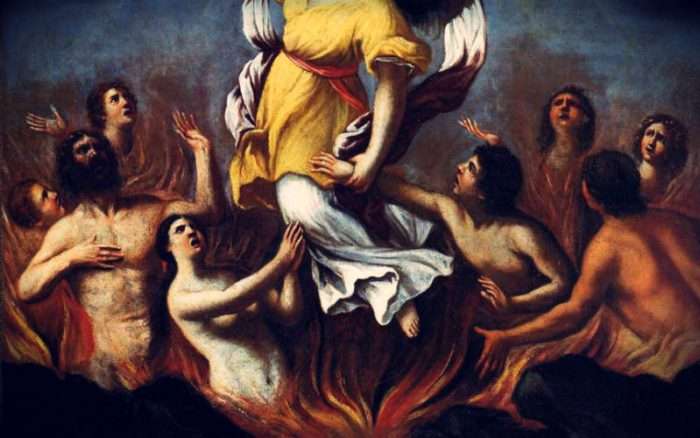 5 Myths About Purgatory That Too Many People Still Believe (Maybe Even You!)

Catholic Home » Articles » 5 Myths About Purgatory That Too Many People Still Believe (Maybe Even You!)

It’s probably safe to say that for most Protestant Christians, there are few doctrines more “Catholic” than Purgatory. Unfortunately, most people’s understanding of Purgatory is fraught with myths and misconceptions.

“All who die in God’s grace and friendship, but still imperfectly purified, are indeed assured of their eternal salvation; but after death they undergo purification, so as to achieve the holiness necessary to enter the joy of heaven. The Church gives the name Purgatory to this final purification of the elect, which is entirely different from the punishment of the damned.

“This teaching is also based on the practice of prayer for the dead, mentioned in Sacred Scripture… From the beginning the Church has honored the memory of the dead and offered prayers in suffrage for them, above all the Eucharistic sacrifice, so that, thus purified, they may attain the beatific vision of God. The Church also commends almsgiving, indulgences, and works of penance undertaken on behalf of the dead…” (CCC 1030-1032)

Now here are 5 of the most common myths about Purgatory:

Myth 1: Purgatory is a second chance at salvation

Truth: At death, a person’s eternal destiny is sealed: he will either spend eternity in heaven or hell. Purgatory is a temporary place that people who are already assured of heaven may go to in order to prepare for heaven. So, once in purgatory, a person can’t alter their eternal destiny – there are no second chances after death.

Myth 2: Purgatory isn’t in the Bible

Truth: In 1 Corinthians 3, St. Paul describes a period after death, but before heaven, in which a Christian is purified with fire. That’s Purgatory.

There is other biblical evidence, to name two: In Matthew 12, Jesus mentions the possibility of sins being forgiven after death, and in 2 Maccabees 12, the practice of praying for the dead (a practice Purgatory makes sense of) is commended. (For more, see this great article.)

Myth 3: Purgatory is a way of being saved apart from Christ

Myth 4: Indulgences are a way of buying salvation

Truth: An indulgence is something granted by the Church that limits or removes a person’s need for Purgatory after death. Indulgences do not, however, determine whether a person goes to heaven or hell.

Further, while historically there have been abuses regarding indulgences, the selling of spiritual things is considered a sin by the Catholic Church (simony).

Myth 5: Praying for the dead is a late medieval corruption of the faith

Truth: Actually, praying for the dead was practiced by Jews prior to Jesus, as recorded in 2 Maccabees 12. It was also practiced in the early Church.

Would you add any myths to this list? Let us know in the comments!