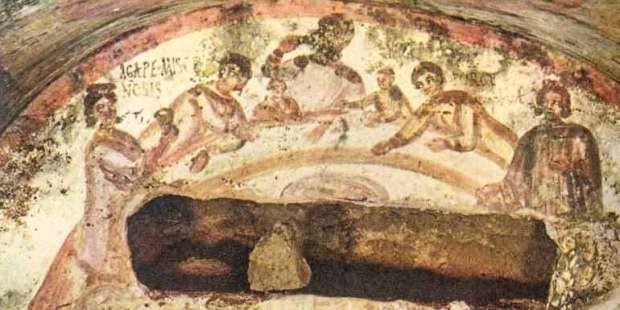 Home » Articles » The best books about early Christianity, according to experts

Want to expand your knowledge of the early Church, beyond the Acts of the Apostles? Try these works.

Is the history of early Christianity so remote for you that you don’t know much about anything after Pentecost? Are you curious about what happened to each of the Apostles, and how the Church spread from Jerusalem to various parts of the world?

We’re reached out to a number of prominent Catholics, authors and intellectuals to get a run-down on what resources are available for the unenlightened, the curious, and those who want to broaden their horizons on the history of the Church in the first few centuries. Here is Aleteia’s guide to the Best Books on Early Christian History:

To go right to a primary source, apart from the New Testament, have a look at the brief Didache, also commonly referred to as The Teachings of the Twelve Apostles. “This is a short book, easy read, that gives a snippet of a glimpse into the thinking and practices of the Church at the end of the first century,” says John Martignoni, Founder and President of the Bible Christian Society. “It contains a brief treatise on the Two Ways — the way of life and the way of death — and also talks about various sins, fasting and prayer, Baptism and the Eucharist, and several other topics, including the end times.”

“Eusebius’ Church History is generally regarded as the first work of the history of the Church, beginning with Our Lord and continuing into the fourth century (when the work was written),” said Fr. Peter M.J. Stravinskas, executive director of the Catholic Education Foundation. “One of its key features is that Eusebius presents detailed lines of succession of the bishops of all the major sees. … At times, Eusebius diverges from what we today might expect of an historian as he moves more into the mode of a hagiographer. That said, it is still a most worthwhile and important text, a genuine starting point for anyone who wants to learn about the Church’s origins.”

Martignoni, who is also Director of Evangelization for the Diocese of Birmingham, Alabama, and Host of EWTN Radio’s Open Line Monday, adds that Eusebius also gives “fascinating accounts of the Apostles, the martyrs, and other prominent figures of the early Church as well as more background on some of the characters that receive just passing mention in the New Testament.”
City of God, by St. Augustine of Hippo

“This historical and theological classic by St. Augustine of Hippo is considered to be one of the greatest works of Western literature for a good reason,” said Fr. Avelino Gonzalez, a priest of the Archdiocese of Washington who works at the Pontifical Council for Promoting Christian Unity. “It was written in a very precarious, and I would say relevant, moment in the history of Western civilization, the Fall of the Roman Empire (410 A.D.). The book presents the first attempt at a philosophy of history. It presents human history as a cosmic conflict between two cohorts or groups of people. One group belongs to the City of Man and consists of members of the human race dedicated to earthly appetites and the pleasures of the passing world. The second group consists of the City of God or members of humanity dedicated to eternal truths of God, and following the incarnate Word of God and Redeemer of Mankind, Jesus Christ. History itself is presented as the unfolding of God’s divine plan for the salvation and happiness of the human race. Only those who make up the society within the City of God will be saved.

“In this interpretation of salvation history, St. Augustine argues that paganism or the sin of idolatry practiced in the Roman Empire contained within itself the seeds of its own destruction, that is, that the City of Man was inherently nihilistic,” Fr. Gonzalez continues. “A question for the contemporary reader is why does it seem that more people throughout history seem to choose the City of Man rather than the City of God, when self-annihilation is inevitable in the former.”

The Sayings of the Desert Fathers: The Alphabetical Collection

Fr. Cassian Folsom, O.S.B., founding prior of the Monastery of San Benedetto, located in Norcia, Italy, the birthplace of St. Benedict, says that this work is “profound, easy to read and readily available.”
“The desert fathers (and mothers) are larger-than-life heroes of the fourth to fifth centuries, whose radical way of life and pithy sayings cut to the quick,” Fr. Folsom says. “Their insights are timeless. By reading them, we are inspired to follow Christ more boldly.

After Jesus: The Triumph of Christianity, by Reader’s Digest

“This is only available in used copies I’m afraid, but it’s fantastic,” says Edmund Mazza, former professor of history at Azusa Pacific University in Los Angeles. “It was done by the editors of Readers Digest, so it is for the non-specialist, but it is intelligent, has wonderful photos and illustrations and respectful of Catholic beliefs.” Mazza is currently teaching Church and world history courses online.

Christ in Christian Tradition. Volume 1: From the Apostolic Age to Chalcedon, by Aloys Grillmeier, SJ

Grillmeier was a German Jesuit and theologian who was committed to ecumenism. This book “presents the development of Christology from the early Christian period to the ninth century, drawing particularly on the traditions of the Eastern Christian Church,” says Fr. Avelino Gonzalez, quoted above. “The text is scholarly yet easy-reading, providing an excellent primer on classical Christology at a time when such texts are rare. The book is considered to be Grillmeier’s magnum opus, and given the upcoming 1700th anniversary of the Council of Nicea (325) in 2025, this book will provide a wonderful study for students and scholars in the history of the early Church as it grappled with the mystery of the Incarnation and theological interpretations of the Person of Christ.”
Destroyer of the gods: Early Christian Distinctiveness in the Roman World, by Larry W. Hurtado.

Carl Olson, editor of Catholic World Report, says that Hurtado, who died last year, was “one of the finest Evangelical New Testament scholars of his generation.”

“He opens this fascinating and informative work by stating, ‘This book addresses our cultural amnesia,’” Olson says. He seeks to describe what made early Christianity so unique, especially in comparison to pagan religions (but also Judaism), and in doing so, he offers timely challenges for Christians today. Although I disagree with some of Hurtado’s claims and presuppositions, I found this to be a thought-provoking book with an important perspective, especially in our increasingly historically-illiterate age.”

Junia and other novels, by Fr. Michael Giesler

Finally, while historical works are important, it’s nice sometimes to delve into a good historical novel, which brings that history alive through the story of fictional characters. Quo Vadis, by Polish author Henryk Sienkiewicz, is probably the best-known novel set in early Christian times. And authors have not stopped putting their imaginations to work to bring something of early Church history to modern readers.

“The three novels that I wrote, based on early Christian writers and the Fathers of the Church, describe the lives of Christians living in the 2nd century and how they literally began to transform the pagan world through their faith and courage,” says Fr. Michael Giesler, a priest of the personal prelature of Opus Dei and senior fellow of the St. Paul Center for Biblical Theology.

Fr. Giesler’s “trilogy” consists of Junia, Marcus, and Grain of Wheat.
“The conversion of Junia and her brother Marcus not only deeply affects their own family, but reaches out to bring Christ’s redemptive love to those around them,” he says. “Though works of historical fiction, they have a real bearing on our own lives and the challenges we face in the 21st century.”