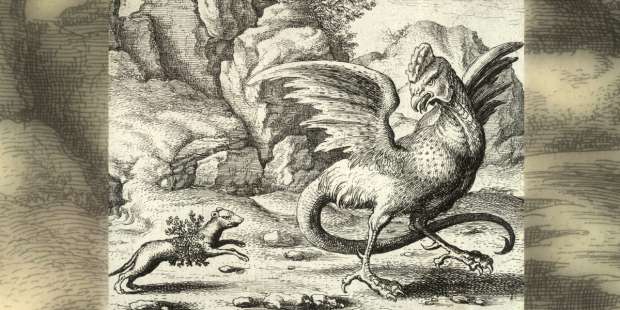 Well known in the ancient world and feared by saints, the creature was a fitting symbol for Satan.

In Psalm 90 (91) we encounter an unusual beast, not normally mentioned in scripture: “Thou shalt walk upon the asp and the basilisk: and thou shalt trample under foot the lion and the dragon” (Psalm 90:13 Douay-Rheims). What is the “basilisk”?Saint Isidore of Seville wrote about this strange animal, giving it a factual entry in his book. He wrote, “‘Basilisk’ (basiliscus) is a Greek word, translated into Latin as “little king” (regulus; cf. , “king”), because it is the king of the snakes, so that they flee when they see it because it kills them with its odor – it also kills a human if it looks at one. Indeed no flying bird may pass unharmed by the basilisk’s face, but however distant it may be it is burnt up and devoured by this animal’s mouth. However, the basilisk may be overcome by weasels. For this reason people take weasels into caves where the basilisk lies hidden; and as the basilisk takes flight at the sight, the weasel chases it down and kills it. Thus the Creator of nature sets forth nothing without a remedy.”

The Roman author Pliny the Elder (1st century) also confirms its attributes, “Anyone who sees the eyes of a basilisk serpent (basilisci serpentis) dies immediately. It is no more than 12 inches long, and has white markings on its head that look like a diadem. Unlike other snakes, which flee its hiss, it moves forward with its middle raised high. Its touch and even its breath scorch grass, kill bushes and burst rocks.”

Saint Albertus Magnus also refers to the basilisk in his works, noting its ability to kill by a single glance.

Some historians believe that the animal these and other ancient authors are referring to is the King Cobra, which can be killed by a mongoose and can spit in a person’s eyes from a long distance.

Naturally it was used as a representation of the devil as it was visually similar to a snake and a dragon. Saint Augustine further explains, “The basilisk is the king of serpents, as the devil is the king of wicked spirits.”
The basilisk was a fitting way to symbolize the great evil of Satan, and proved to be a powerful image that was used throughout the Middle Ages in Christian art.