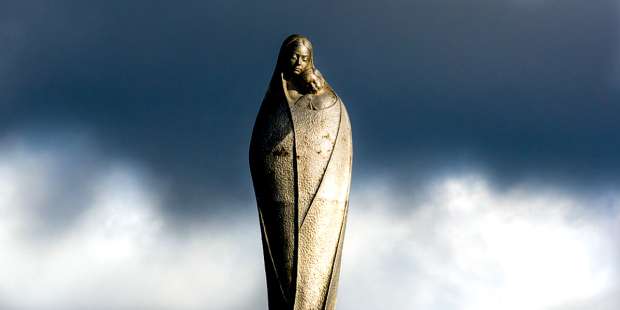 The Church that Our Lady outlined in snow

Catholic Home » Articles » The Church that Our Lady outlined in snow

On August 5 each year the Church celebrates the memorial of the Dedication of St. Mary Major, also known as “The Feast of Our Lady of the Snows,” due to a miraculous event that occurred on this day in the 4th century.

During the middle of the 4th century there was a Roman patrician named John and his wife, who were unable to have children. They continually prayed to be blessed with a child but never received such a gift. As the end of their lives drew nearer, they discussed with each other what to do with their property.

They decided to pray to the Blessed Virgin Mary and ask for her assistance. On the night of August 5, a miraculous snowfall fell on the Esquiline Hill in Rome. It was in the shape of a rectangle and proved to be a strange phenomenon for Rome, as August is one of the hottest months for the city.

The couple also had a vision that same night which explained to them that they were to build a church on the location marked with snow. Pope Liberius had the same dream, rose immediately in the morning and came to the spot, finding the couple kneeling in prayer in the snow. Once the site of the church was staked out, the snow melted as miraculously as it had appeared. A church was built soon after and dedicated to the Blessed Virgin Mary. That Church today is the “Mother Church” of Rome, the Basilica of St. Mary Major.

Each year on the feast of the dedication a shower of white rose petals are thrown down from the ceiling of the basilica in memory of the miraculous snowfall.

Interestingly enough, St. Mary Major is also the home to relics associated with the birth of Jesus Christ. Parts of the crib from Bethlehem are enshrined in the church and have been there since the 7th century.