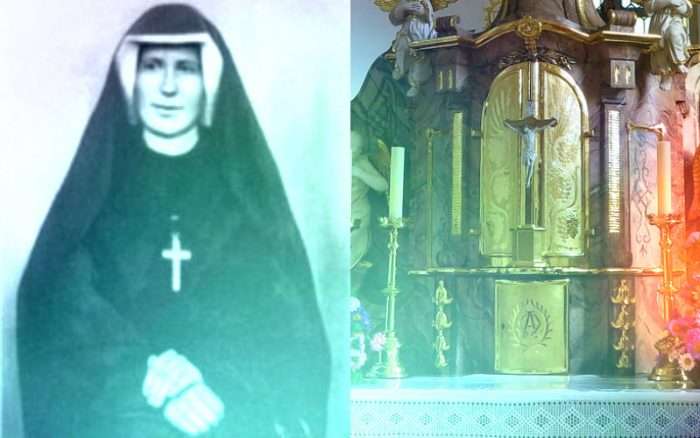 Home » Stories » The Mysterious Story of St. Faustina vs. the Flying Eucharist

Previously, we shared St. Faustina’s beautiful Litany to the Blessed Host. Today we’re sharing the story of a unique and mysterious Eucharistic miracle she experienced.

St. Faustina was one of the great mystics of the 20th century, and she recorded her amazing regular supernatural experiences in her diary. In a passage dated to the late 1920s, she shares a number of fascinating stories about her personal encounters with Jesus Christ, both in apparitions and in the Eucharist. One amazing story stands out that took place while she was praying in her convent’s chapel.

“One day Jesus said to me, ‘I am going to leave this house,” the diary reads. “Because there are things here which displease Me.’” (Diary, 44ff)

Then something strange happened: the Eucharist left the tabernacle on its own and flew to her! “And the Host came out of the tabernacle and came to rest in my hand…”

If this were you, what would you do in this situation? The Blessed Eucharist – which is Christ’s body, blood, soul, and divinity – has just miraculously started moving around the room and landed in your hand. Would you be scared? Confused? Would you just freeze?

Well here’s how the saint responded: “I, with joy, placed it back in the tabernacle.”

But the Eucharist kept moving. “This was repeated a second time, and I did the same thing. Despite this, it happened a third time…”

After the third time, though, something new happened: “…the Host was transformed into the living Lord Jesus, who said to me, ‘I will stay here no longer!’”

Now, Jesus has told her twice that he wants to leave, and she has prevented him multiple times. After this second declaration, wouldn’t you think a saint would relent?

Not this saint! She confidently told Our Lord that she just wouldn’t let him leave the convent. She explains:

“At this, a powerful love for Jesus rose up in my soul, I answered, ‘And I, I will not let You leave this house, Jesus! And again Jesus disappeared while the Host remained in my hands. Once again I put it back in the chalice and closed it up in the tabernacle.”

This time, it was Jesus who relented. “And Jesus stayed with us.”

But the polish nun didn’t leave it at that. Jesus had said he had wanted to leave due to “things here which displease me.” So, in a very saintly manner, she took it on herself to try to atone for the problems: “I undertook to make three days of adoration by way of reparation.”

And that’s all she says about the encounter. What an incredible story of a wonderfully personal and intimate encounter with Our Lord!

St. Faustina, please pray for us!