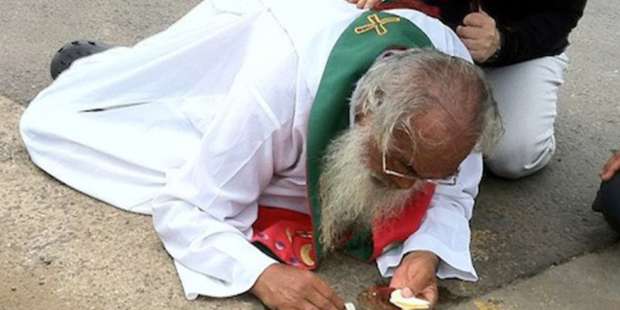 Home » Articles » The Priest, and the Pieces of Christ’s Body He Protects

Yesterday, in the midst of social media silliness about Christians taking umbrage at red coffee cups, this image came across my desk and gave me real pause. It is not a new photograph, but it’s gripping and real in the way that coffee-cup drama never can be.It is true that there are some in the United States who would like to see religions—all religions, not just Christianity—removed from the public square (“I support the right of people to believe what they do and say what they wish—in their pews, homes and hearts,” writes Frank Bruni, redefining “tolerance” down to silence and invisibility). And yes, the Little Sisters of the Poor have been forced to take their argument against the administrations HHS mandate to the Supreme Court, but Bruni’s position is, for the moment, a minority opinion, and at least we do currently have courts to which we may appeal. For the most part—quite unlike our counterparts in the Near and Middle East, of course, and in parts of Asia—Christians in the United States are pretty comfortable.

What we are seeing in this photograph is an older priest, attacked and knocked down as he was distributing communion, but concerned only with collecting and protecting the Holy Eucharist. According to the Asian Catholic News Agency, UCA News, it happened on August 8, 2012, in the village of Gangjeong, on the island of Jeju, South Korea. The priest, Father Bartholomew Mun Jung-hyun, was celebrating a Mass at the gates of a controversial naval base the government was building in the area. He was distributing Holy Communion when authorities broke in and began to beat those present, including the priest, throwing him to the ground. Amid reports that the spilled Eucharist had been stomped on by a police officer, the Diocese of Cheju immediately demanded an apology. Police denied the charge.

As an editor at Aleteia said, the image says more about the priesthood than a thousand theological treatises. Very true. And it should give serious pause to (the few but noisy) Christians tempted to cry “persecution!” when a secular interest like Starbucks maintains a determinedly secular stance at Christmas.

From time to time in the United States, activist groups will push limits and go too far, and what has happened before will doubtless happen again. In 1989 ACT UP invaded Holy Mass at Saint Patrick’s Cathedral and desecrated the Eucharist, damaging their own credibility and losing a great deal of public sympathy in the process. Given the tenor of the times, we should be ready to encounter unhinged activity almost anywhere. If and when real persecution comes, it will arrive not in the form of a red paper cup from which one is free to drink or not drink but via mindless mobs or twisted authority or both.

Then, may we respond to it with dignity, and with our priorities purposeful and in right order. May we remember a priest in a small village in South Korea, answering a threat with no thoughts for himself but only for the blessed and broken Body of Christ—with humility that brings glory to God.