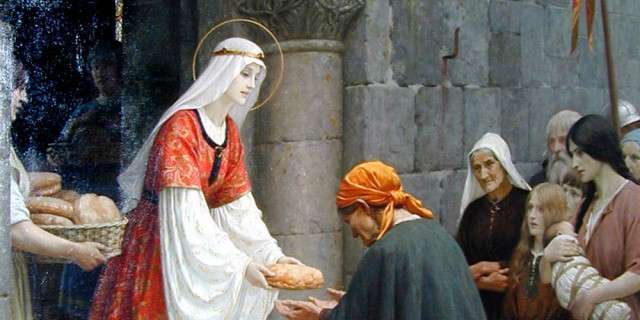 The princess saint whose life can inspire young people today

Elizabeth of Hungary shows us how young people can use their lives to love and serve.

Wake up, go to work, come home, eat dinner, watch something, go to sleep. Do you get lost in your daily routine and wonder if you’ll ever do something meaningful with your life? These feelings are usually especially strong if you feel stuck in a job you hate, or struggling with dating or discerning a specific relationship.

St. Elizabeth of Hungary was a young woman who is now a saint because of how she lived her life and vocation —  and she only lived until she was 24 years old. That’s not a long time. But let’s look at what she did, and how her life may relate to other young people, despite the many centuries that have passed since her death.

1. SHE WAS AN INFLUENCER.

Not on Instagram, mind you, but she had a position of power–she was married to a king. People noticed her and watched what she did. And what she chose to do with her power and connections was serve the poor and the sick. She brought them food and ministered to them in their own homes and in hospitals. Maybe you are an influencer on social media. Maybe you’re just an influencer in your own circle of friends and family. Either way, people are looking at how you live your life.

She got married at 14, and only lived until she was 24. Even though she had an arranged marriage, she was very much in love with her husband, and was devastated at his death only six years after their marriage (and a few days before she gave birth to their youngest child). Her relationship with her husband strengthened both of them and brought them each closer to Christ. Her husband, Louis, has not been canonized, but many of his people considered him a saint as well.

3. SHE LIVED WITH PEOPLE WHO DIDN’T UNDERSTAND HER.

Her court didn’t like how religious she was. They also didn’t like that she would go to the homes of the poor and sick in her kingdom to bring them food and medicine, and take care of them. That was not seen as a safe or proper way to live as royalty. Her relationships with her in-laws were tense, as she often protested when the food the palace served was taken from people who needed it.

She used her youth, her marriage, and her influence — despite people who thought she was crazy — all for God and her mission —to dramatically increase the quality of life for the poor and sick in her area.

If you feel called to serve and you’re in your teens or twenties, don’t be afraid to explore what that looks like. You don’t have to wait until you’re older and have seen more of the world.How can you serve in your life right now? Follow St. Elizabeth’s example by serving the people who are in your life today. She started with her husband and children and close friends, and then moved on to the poor and sick in her kingdom.

No matter how stuck you feel in life or in your routine, the little efforts you make for others are what will matter in the end. Look at who is in your life. Start with people you know and love. Then move to people you know. Then move to people in your town that you don’t know. For example, that might look like starting with your family and close friends. How can you serve them? We’re talking little ways. A phone call, a kind word. Then, what about your coworkers and acquaintances? Avoiding gossip at work, reaching out to someone who gets on your nerves.

And finally, is there a ministry you have thought about joining, or a group of people you feel called to reach out to nearby? What kinds of gifts and talents do you have that you could use to help others? And if you can’t think of any gifts that you have, that’s not a good excuse to not get involved with something. You can’t know how it will go until you try. St. Elizabeth, pray for us!