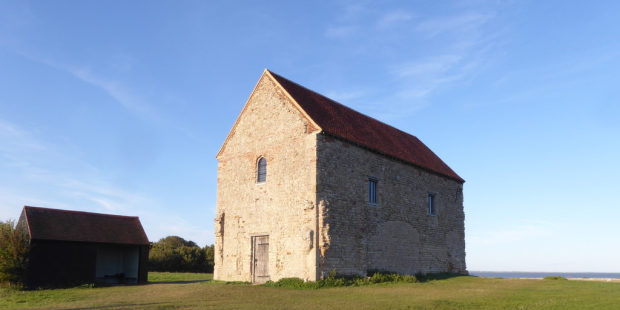 The story of St. Peter-on-the-Wall, one of the oldest churches in England

Home » Stories » The story of St. Peter-on-the-Wall, one of the oldest churches in England

The Chapel of St. Peter-On-The-Wall is not an architectural masterpiece, nor is it well known for its ornamentation or the relics it hosts. This small, sober, and unpretentious chapel, located in Bradwell-On-Sea in Essex (on the southeastern British coast, is among the oldest mostly intact Christian churches in England. In fact, some sources claim this is the second oldest Christian building in all Great Britain still standing today (St. Martin’s Church in Canterbury being the first).

The little we know about the man who built it, St. Cedd, we get from St. Bede’s Ecclesiastical History of the English People.

According to Bede, Cedd was born in Northumbria, and was taken to the Holy Island of Lindisfarne (the great center of Celtic Christianity) by St. Aidan himself. Bede also relates that Cedd had three brothers: Chad, Cynibil, and Caelin. All four were priests, but only Cedd and Chad became bishops. By the year 653 Cedd was already a priest, so we can date his birth around the year 620.

One year after his ordination, in 654, Cedd built St. Peter-on-the-Wall among the ruins of an abandoned Roman fort. Using some of the Roman bricks and stones he found in the place, he built this Anglo-Celtic church for the East Saxons living in the area, as he had been sent from Lindisfarne at the request of the then-king of the Saxons, Sigeberth the Good. Since that time the chapel has belonged to the London diocese, since Cedd served as bishop there. The chapel’s website tells the story of its construction with as much detail as possible:

In 653 Cedd sailed down the east coast of England from Lindisfarne and landed at Bradwell. Here he found the ruins of an old deserted Roman fort. He probably first built a small wooden church but as there was so much stone from the fort he soon realised that would provide a much more permanent building, so he replaced it the next year with the chapel we see today! Cedd modelled his church on the style of churches in Egypt and Syria. The Celtic Christians were greatly influenced by the churches in that part of the world and we know that St. Antony of Egypt had built his church from the ruins of a fort on the banks of a river, just as Cedd did on the banks of the River Blackwater in Essex (then known as the River Pant).

But we also know very little about the history of this chapel. We know the year of its foundation from Bede’s texts, and then we hear nothing of it again until the 15th century, when local clergymen report to the bishop of London that they have expanded the church “slightly.” The church suffered a fire and was repaired, and remained in use until the 16th century, when it was abandoned and even used as a barn for a while.

It was only restored and reconsecrated as a chapel in 1920.