Advertisement
As surprising as it may seem, on occasion I exhibit an attitude. One such occasion came to mind today. It happened many years ago. I was reminded of a phone call I received from Bart Brewer, a former priest who operated a small anti-Catholic ministry called Mission to Catholics International. (The “International” part was just for show.)
One day, Brewer phoned me at the Catholic Answers office. He had seen an article on the Mass under my byline in a magazine published by Our Sunday Visitor.
“I noticed that you mentioned Loraine Boettner, Jimmy Swaggart, and Keith Green as opponents of the idolatry of the Mass,” he said. “Why the cowardice? Why didn’t you quote from an ex-priest?”
“Are you miffed because your name wasn’t mentioned?”
“Not at all,” he said. “I have no interest in fame. But we don’t rely on people like Boettner [author of Roman Catholicism, to which I devoted a chapter in my Catholicism and Fundamentalism]. We rely on the pure truth of the Bible alone. So why didn’t you quote from an ex-priest, someone who knows what a blasphemy the Mass really is?”
“I’m not aware of any ex-priests competent enough to quote from,” I said.

“A low blow!”
“Well, what ex-priests could I have quoted?”
“How about Greg Adams?”
“You’re kidding. What has he written that I can quote from? All I’m aware of is a short account of his conversion that you published in tract form. He’s your expert? Don’t you have anyone else?”
“There’s Charles Allen Berry.”
“You mean the author of The Secret of Vatican Hill, which I reviewed in our newsletter? What has he written besides that silly novel? He’s an embarrassment even to Fundamentalists. What has he written on the Mass—anything?”
“You’re afraid to quote ex-priests because you know they know the truth about the Mass.”
“Give me someone to quote. Show me his writings. I can’t quote from something that isn’t even written. You’re talking about nonexistent experts. It still seems to me you’re upset because your name wasn’t mentioned.”
There followed an unreproducible hour of talking at cross purposes. Several times I asked him why he wouldn’t debate me in public.
“Debates aren’t necessary,” he said. “What’s necessary is preaching the Word of God.”
“You debated me once, you know, and it backfired on you,” I said. “You tried to railroad the proceedings, and you just ended up making your own congregants angry at you. People from your own congregation walked out saying they never would ‘fellowship’ there again because of the way you conducted yourself. Are you afraid to have a fair fight: your anti-Catholicism against the fullness of Christian truth?” (I confess I did my best to egg him on by not speaking through indirection.)
He avoided a straight answer, so I asked him why he declined to appear against me on a live, two-hour, call-in radio show aired out of Los Angeles (not Catholic Answers Live, which didn’t exist then).
“I never got a formal invitation.”
“The producer told me you refused when he spoke to you.”
“I never got a formal call.”
“What’s a formal call? The man said he spoke with you and you refused. Are you saying he’s a liar? Why should he lie about this? He has no reason to. He has no religious ax to grind. He has no stake in the Catholic-versus-Fundamentalist squabble. He isn’t even Catholic. He’s Jewish.”
“I would need a formal invitation.”
“You mean if he were to call you and invite you on the show, you’d accept?”
“Sure.”
“All right. I’ll let him know that, and this time he’ll make a ‘formal’ call. I’m sure you won’t object if we let people know how you respond to his invitation. How’s that?”
He didn’t answer. He went back to his favored theme, the necessity of quoting from ex-priests.
“Who do you think knows more about the Mass, myself or you?”
“Judging from your writings about the Mass, apparently I do,” I said. (There was no sense in being falsely modest at a time like this.) “What you’ve written about the Mass demonstrates you know almost nothing about it.”
“Were you educated as a priest, as I was?” he asked.
“Are you saying a priest automatically knows more about the Mass than does a layman?”
“I said, were you a priest?”
“You know very well that’s immaterial,” I replied. “Look. Either I know more than you do about the Mass, or you know more than I do but are intentionally misrepresenting the truth. Which way do you want it?”
He didn’t want it either way, and the conversation continued to go nowhere. All this time my colleagues were in the room, passing me notes about what uppity things I should say. We had trouble keeping straight faces. Several times I had to cover the receiver to muffle my laughter. After making a final blow at the Catholic Church, the other fellow hung up.
“We haven’t heard from him in four months,” I told my co-workers, “and it’ll be another four before we hear from him again.”
I was wrong. That night the phone rang at home. It was the anti-Catholic paladin again. “Dave Hunt has a new book out. You need to read it. Get to the book store right away and get a copy.”
“It’s after nine o’clock,” I said. “Book stores are closed.”
“Oh, yeah. Well, get it tomorrow. You need to read it to learn about the blasphemy of the Mass.” Then he was gone. I forgot to ask him why he was recommending something by Dave Hunt. Hunt wasn’t even an ex-priest.

The story behind the Irish priest whose prayers could heal 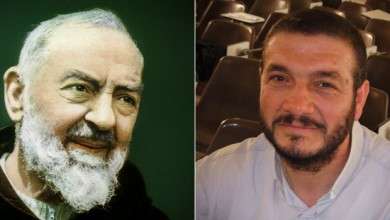 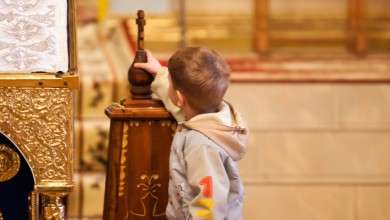 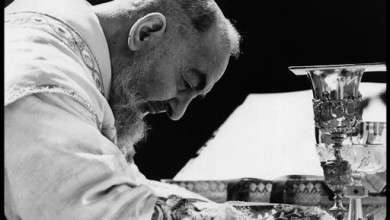