I made my way up the famous mountain to Mont St. Michel and found the religious community’s quarters. They live in the former Abbot’s lodgings on the left-hand side as you approach the monastery at the top. They welcomed me, showed me my room and I joined in their life for a few days.

The atmosphere on the mountain when the tourists have gone is amazing. The silence and birdcall, the distant horizon of the sea, and the feeling that you are separated from the earth, suspended between two worlds are simply amazing and overwhelming. A tourist visit to Mont St. Michel is great, but to be there in solitude takes you into another realm completely.

That night in my simple room I woke at three am. I was wide awake and aware of a presence at the foot of my bed. It seemed to me to be about seven-foot tall. Very strong and calm. Very powerful and full of peace.

In my mind, I asked, “Who are you?” The reply is, “Your guardian angel. I am walking with you on this journey.” I asked if I could know the angel’s name and he agreed, but I was to never tell anyone else. I then rested in that presence for what seemed a very long time before I eventually went back to sleep.

The memory of this experience is not only still vivid in my mind, but the awareness of that angel’s continued presence is also strong almost daily if I stop to make myself aware.

So I stop to analyze–because that’s what I’m like–and I’m aware that my angel experience could very well be nothing more than a subjective experience within my own mind.

The doubter would say, “You had been through some stressful times of transition in your life. You were setting out on a great adventure with many unknown factors. You were tired. You had walked a long way. You got soaked and discouraged. You were also therefore in a highly impressionable state of mind. You were open to suggestions.

“Furthermore, the wonderful experience of being at Mont St. Michel lent itself to that context of suggestion. The whole place was transcendent with the proximity of the sea and sky. Furthermore, and most importantly, you believed in angels and you wanted to have an angel experience.

“In other words, you made it up. It was a figment of your imagination. It took place at three in the morning. That is well known to be a time when the mind is particularly susceptible to suggestion because that is when you are in the deepest realm of sleep.

“If you didn’t actually dream the whole thing, it was the next best thing to a dream. You woke up, but you were still in a semi-dream state. Your mind produced what you understood to be an encounter with your guardian angel.

“This was not real. There are no such things as angels. If you had been at Harry Potter World you would probably be telling us that you had an encounter with Hagrid.”

I am aware of this cynical viewpoint and I cannot dismiss it. All of that may very well be true, but then I am reminded of St. Joan of Arc’s comment at her trial–or perhaps it was words put into her mouth by George Bernard Shaw in his play about Joan.

Either way, the judges at her trial dismissed her visions as being “all in her imagination” and she replied, “Of course. How else would God speak to me except through my imagination?”

This brings me to consider the cleverness of the girl. Our imagination is not to be dismissed lightly. In our scientific and cynical age, we pooh-pooh the imagination. Thinking it is not good for much more than enjoying fantasy literature or sentimental New Age notions. But of course, imagination is arguably the most powerful and important aspect of our minds.

This is also what it means to have an abundant and faith-filled spirituality. The imagination should be alive and active in our prayer lives. The imagination is a great gift that opens us to understand more fully the creatively abundant mind of God.

Was my encounter with the angel all in my imagination?

Of course. How else would my angel be in touch with me except through my imagination?

Follow Fr Longenecker’s award-winning blog, listen to his podcasts, browse his books and be in touch at dwightlongenecker.com. 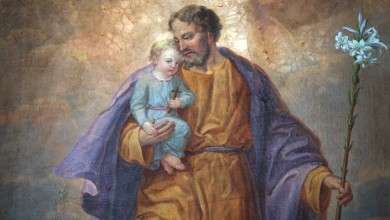 Prayer to Saint Joseph in Time of Need