After churches were closed two weeks ago, some priests celebrated Mass outdoors, until the bishops put a stop to that too.

The city of Bergamo in northern Italy has lost at least 11 priests to COVID-19, the disease caused by the coronavirus, perhaps the highest concentration of clerics who have died during this pandemic. That fact saddens but does not surprise native son Mario Enzler.

Enzler is a former Swiss Guard who grew up in Bergamo and is staying in daily contact with his octogenarian parents there. His mother knew five of the priests who died and is saddened that due to public restrictions, they will not have funerals.

Although the public celebration of Mass has been suspended, priests are “in constant contact” with people “through phone calls and social media. They are willing to do whatever it takes,” Enzler said in an interview Wednesday. “It’s prayer and the faith that are uniting them.”

By Wednesday, Lombardy, the region surrounding Bergamo, 12,266 people were infected with the virus, with 1,959 deaths, according to the Italian Ministry of Health.

Italian dioceses in Milan and environs have reported the deaths of 28 priests due to COVID-19, according to Catholic News Agency. All but three of the priests were over the age of 70, and more than half were over 80 years old, CNA said.

In Bergamo, which is in Lombardy, 15 other priests have been hospitalized. Pope Francis called the bishop of Bergamo, Francesco Beschi, Wednesday to assure him of his daily prayer for his diocese, according to i.Media. Beschi praised the “pastoral imagination” of the priests of the diocese who, despite the dramatic situation, find solutions to maintain “proximity” with their faithful.

Enzler, who created the Master of Science in Ecclesial Administration and Management at the Catholic University of America, isn’t surprised that so many priests died in Bergamo from COVID-19. “They don’t stay put. They’re out fulfilling their priestly call to be with the people, be available to the people, counseling, encouraging, leading the people to Christ,” he said. The clergy there are helping people “understand that not all tribulations come in a way that we can understand, but they come so we can understand a higher gospel, which is the Gospel of Suffering, something St John Paul II said to me once.”

He knew one of the priests who succumbed to COVID-19 in Bergamo.

“He was the kind of priest who always wears his cassock, who wakes up in the morning, celebrates Mass and then would be in the middle of his flock,” he said. “The majority of the Bergamaschi priests are like that. They don’t live isolated. They are constantly with and for the people. They fulfil what St. John Paul II once told a group of priests (and I was in the room), that to be a priest means first and foremost to be a man for others.”

Enzler is also in touch with other Swiss Guards, who describe how the Vatican now is largely shut down. “Even Pope Emeritus Benedict doesn’t go out in his golf cart for his little outings right now,” Enzler said.

What’s far from shut down, however, is the faith and prayer life of many Italians. “The media was full of videos of Italians singing from their balconies during the recent lockdown, but there are more villages where the faith is still alive,” he said. “The elderly are united in prayer. The Bergamaschi are an authentic force for unity — united in prayer. They’re all focused on the Eucharist.”

In some parts of Italy, churches are open for a few hours a day so people can go pray on their own, but in Bergamo that’s not allowed right now. “My parents’ parish has already been two weeks without mass,” Enzler said. “My mom is the one who opens the church and closes the church.”

After authorities closed the churches two weeks ago, some priests began celebrating Mass in front of their church. One priest did that there for three days, “but then the carabinieri came and said ‘Don Luigi, you really can’t do that,’” Enzler related. “And the priest got upset and said ‘We’re outdoors and the people are keeping a distance.’ But then the bishop finally said you really can’t do that.’”

The former Swiss Guard also observed that while Americans right now are “more concerned that the store shelves are empty, Italians are not that concerned about the food. It’s a totally different mentality. They always have food stuck away, and they’re extremely creative. They can turn a bowl of rice and a few beans into something delicious. They have this innate goodness of transforming food.”

The U.N. has much work to do, Vatican ‘foreign minister’ says 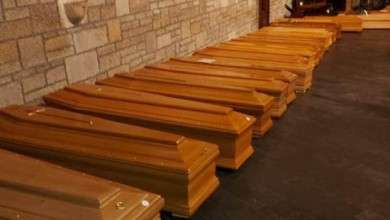 Six priests in one Italian town die of coronavirus