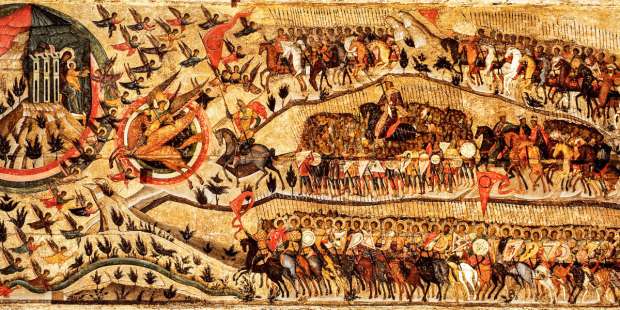 The Church is much bigger than you can possibly imagine.

When Catholics say “the Church,” the phrase typically refers to one of three things: a visible house of worship, the hierarchy who lead the religious organization, or the 1.2 billion members living on earth. However, these definitions of the Catholic Church, while each having their own value, are only part of the picture. There is much more to the Church than meets the eye.

The Catechism of the Catholic Church explains how there are “three states of the Church … at the present time some of his disciples are pilgrims on earth. Others have died and are being purified, while still others are in glory, contemplating ‘in full light, God himself triune and one, exactly as he is’” (CCC 954).

Traditionally these three states have been referred to as the Church Militant, Church Penitent (also known as Church Suffering or Church Expectant) and Church Triumphant. Together, these three make up the Communion of Saints we confess in the Creed.

While the word “militant” may appear to suggest that the Church on earth is to take up arms in a violent way, the phase refers to our task of being “soldiers of Christ” in the spiritual realm. This concerns our need to battle our sinful passions as well as the spiritual presence of evil in the world. As St. Ignatius of Loyola put it, we need to choose which army we belong to; either that of Christ or that of the World.

After having struggled on earth to follow Christ’s army, those in need of further purification before entering Heavenly bliss make up the Church Penitent. This stage of further purification is more commonly known as Purgatory and is the “washroom of Heaven” (as C.S. Lewis put it), which cleanses any sins or earthly attachments before the soul embraces the joys of Heaven. The members of the Church Penitent rely heavily on the prayers of the Church Militant so that they may proceed to their eternal embrace with Our Lord.

The Church Triumphant are those people who have “run the race” and are crowned with glory in Heaven, the saints. Even though we do not inhabit the same physical space anymore, we are intimately united with them in a spiritual way beyond understanding. Their intercession is vital to our own sanctification and they continually cheer us on as we “fight the good fight” in hopes of joining them one day in the future.