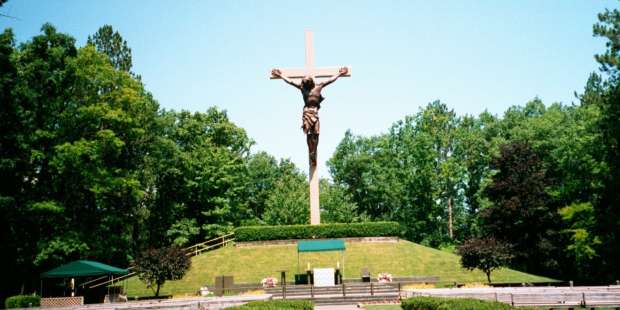 The world’s largest crucifix is in Michigan

Catholic Home » News » The world’s largest crucifix is in Michigan

The 28-ft tall statue is one of the most visited shrines in the Wolverine State.

Think of impressive crucifixes and places like Rome or Jerusalem come to mind. Yet, the world’s largest crucifix is found amidst the woods of a pristine forest in Michigan. The “Cross in the Woods” is the work of American sculptor Marshall Fredricks, who assembled the majestic wooden and bronze sculpture after being commissioned to create a much smaller piece (the original commission asked for a 6-ft tall crucifix).

Fredricks was asked to craft the crucifix by the parish of Indian River, a rural area that in 1946 was designated by Bishop Francis J. Haas of the Diocese of Grand Rapids as the place of worship for local parishioners who lived far away from the nearest church.

It took Fredricks four years to complete the majestic sculpture, weighing seven tons and measuring 28 feet. He particularly wanted to “give the face an expression of great peace and strength and offer encouragement to everyone who viewed the Cross.” After getting special permission from the Vatican to represent Christ without the crown of thorns, Fredricks sculpted Jesus’ face in a peaceful expression that still inspires awe among visitors today.

Once the plaster model was completed, Fredericks asked Kristians-Kunst Metalstobori Foundry in Oslo, Norway, to cast it in bronze. The seven-ton statue was then shipped across the Atlantic, making it one of the heaviest sculptures ever to be shipped from Europe to the US.

The figure of Christ was then attached to the Crucifix at the Indian River Catholic Shrine in Indian River, Michigan, in 1959 using 13 bolts each 30-in long and 2-in thick. Since then, the tallest crucifix in the world has helped put rural Michigan onto the Catholic tourism map, attracting more than 300,000 visitors every year.

To visit the “Cross in the Woods” take the I-75 to exit 310, Indian River. Then take Highway 68 West and turn right after it separates from Highway 27. Follows signs to the shrine.