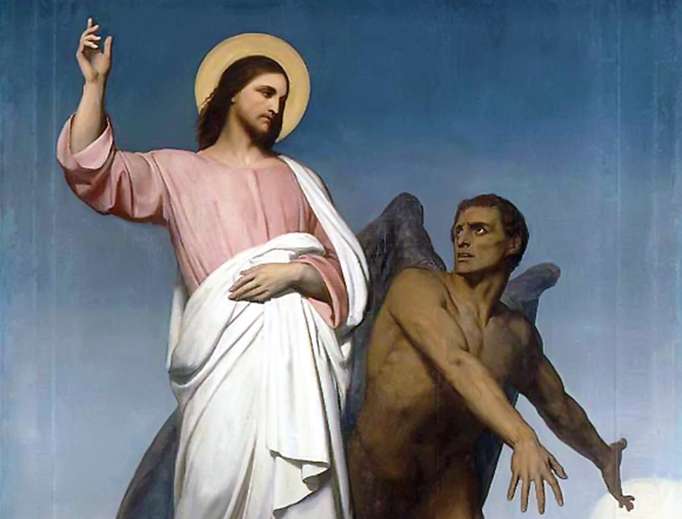 Pray for our priests. They need our prayers, and we need them to bring us the sacraments and shepherd us.

In December, a Boise, Idaho, priest of 45 years, who lived in world of Satanism and child pornography, was sentenced to 25 years in prison. I came across the story, glossed over it, and turned away, finding it too disturbing.

Then an editor asked if I wanted to write about it. Well, not really. But after talking about it with a Catholic therapist and two exorcists, I discovered some worthwhile points to ponder. First, brace yourself for a summary and go here if you can stomach it all.

Thomas Faucher, 73, was caught with thousands of heinous images and satanic pronouncements on his phone and computer. There were 24 charges against him — including possession of LSD, marijuana, and Ecstasy — of which he pleaded guilty to five, claiming he could not remember much due to depression and dementia. Faucher’s interests on chat rooms are testimony to the hideous face of evil: actively seeking interests with gay men, satanic interests, violent and torturous images including rape, torture, and killing children, and fantasies including altar boys and babies.

Faucher’s defense pointed out that he never actually sexually abused a child and that he was a wonderful person who helped many people. Going from a position of power to nothing through retirement led to loneliness, alcoholism and drug abuse, which were blamed for his fall into darkness.

The diocese evicted Faucher while he was being held in the county jail and they had the house exorcised before selling it. Faucher apologized at his sentencing. “I was one really sick puppy. I screwed up big time… I feel so much remorse and anger.”

How Can This Happen?

How could a priest plunge so deep into depravity?  I asked Paul Peloquin, a Catholic clinical psychologist in Albuquerque, New Mexico, who was abused as an 11-year-old. He returned to the Church after a thirty-year absence and now helps others to heal spiritually and emotionally.

Peloquin said he thought Faucher seemed psychotic, so he was surprised his attorney did not try for an insanity plea. He wondered if Faucher comprehended his degree of wretchedness, given he had offered to help others by speaking out instead of going to prison.

“Priests are human and can fall to the basement of corruption like anyone else,” Peloquin explained. “And psychotic processes, as well as Satanic influences, could turn any priest into a scoundrel. It seems that Satanism could easily be associated with such levels of degradation and psychosis.”

Peloquin pointed out that priests are constantly hounded by temptations and anyone who does not realize that is simply waiting for folly. Given the repeated missteps often allowed priests — unlike therapists who lose their licenses for unethical behavior — he said perhaps there should be a zero-tolerance policy, and priests should be given ongoing continuing education that deal with boundary issues. It may not have saved someone like Faucher, according to Peloquin, but he wondered why someone on some level did not question any of his behavior.

“I have many more questions about the bad behavior of priests than answers,” Peloquin said. “I don’t know why the bishops don’t make it their business to know their priests more clearly. In New Mexico, like Idaho, the distances are great, and priests can be left to their own devices quite easily, and they can be neglected and sometime forgotten.”

While interviewing two exorcists on unrelated topics for upcoming articles, I asked for their perspective on Faucher. After reading the article I sent to inform him,  Father Michael (not his real name) who has been a diocesan exorcist for 10 years, said: “Boy that was an ugly story. I am not surprised they essentially gave him a life sentence.”

A fall from grace for a priest is especially upsetting, according to him, because priests are supposed to be examples. “But they are human and throughout the history of the Church, we’ve had very holy priests and bishops and some that were not,” Father Michael said. “Jesus called twelve men and one he called a Satan—Peter—who was tempting him and who later denied him. Not to mention Judas, who stole from the community purse and later betrayed Jesus. So, from the beginning, some followers of Jesus had some pretty appalling behavior. The Bible said that Satan entered into Judas. He ended up being possessed and hanging himself.”

Father Michael explained that a priest ends up this way the same way anyone does: sin. “The further down the road they go, the harder it is to go back,” he said. “In the end, we will either be filled with light and goodness in heaven or filled with darkness in hell.” He warned that too many people are presumptuous — not worrying about sin — thinking they can wait until the last minute to repent, but there is no such guarantee.

When it comes to priests, Father Michael said they are the devil’s No. 1 target. “If he can corrupt the vocation of a priest, who is supposed to be the image of Jesus, that’s a huge victory to be able to stick in Jesus’ eye,” he said. “The devil takes a miserable delight in hurting a priest, so he works hard at it, so we need prayers.”

Msgr. John Esseff has been a priest for 65 years and an exorcist in the Diocese of Scranton, Pennsylvania, and an exorcist for over 40 years. He is a founder of the Pope Leo XIII Institute, which trains exorcists and just recently contributed to the chapter on spiritual protection in the book Holy Hacks .

Although Msgr. Esseff holds priests to high standards, he does not like to treat sin as a spectator sport. “St. Francis, [of Assisi] who I love very dearly, looked around at all the wickedness of the world,” he said. “Then he turned and looked at himself and said he saw the same evil. There is no greater misery than I find in myself. If God can love me, he can love that Satanist.”

“I cannot find it in my heart any way to condemn anyone,” Msgr. Esseff said. “As we have all heard, when we point at anyone, there’s four fingers pointing back. There’s something of sin in each of us, but the love that is in us, is from God.”

Despite the horrific nature of some sins, Msgr. Esseff explained that no one is beyond God’s mercy. God wants even the biggest sinners to repent and get to heaven. It is the devil who desires eternal damnation.

So, after we are duly horrified, our task should be to pray for offenders — and always for the victims. We can also make praying for priests our daily vocation. We need one another. They need our prayers and we need them to bring us the sacraments and shepherd us.