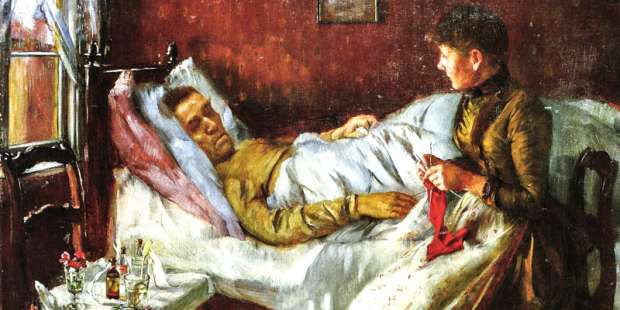 … and asks the angels to bear us “in comfort to the place of healing.”

Jesus has a soft spot for the sick and suffering. The Gospels recall for us numerous episodes of Jesus healing and curing people.There is one in particular that greatly affected Jesus, as it involved a group of men bringing him someone who could not walk.

[M]any were gathered together, so that there was no longer room for them, not even about the door … And they came, bringing to him a paralytic carried by four men. And when they could not get near him because of the crowd, they removed the roof above him; and when they had made an opening, they let down the pallet on which the paralytic lay. And when Jesus saw their faith, he said to the paralytic, “My son, your sins are forgiven … that you may know that the Son of man has authority on earth to forgive sins”—he said to the paralytic— “I say to you, rise, take up your pallet and go home.” (Mark 2:2-11)

What’s interesting is how Jesus was moved by the faith of the men who brought the paralytic and it was through their faith and compassion that Jesus performed a miracle.

Fast forward 2,000 years and Jesus still looks tenderly on those who bear the sick to houses of healing. In recognition of that fact the Church has provided a special blessing over stretchers, ambulances and wheelchairs in the Roman Ritual. It recalls this episode of healing in the Gospels and calls down God’s blessing upon those who “animated with true charity … bear the wounded and the sick to the place of healing.”

Lord Jesus Christ, Son of the living God, who during your earthly sojourn went about doing good, alleviating the people’s suffering and infirmities, and restoring bodily and spiritual vigor to the paralytic lying on his pallet; look with favor, we pray, on the faith and compassion of your servants who, animated with true charity by your example as well as by your command, have constructed this stretcher (or ambulance or wheelchair) to bear the wounded and the sick to the place of healing. By the blessing + we impart to it in the power of your name, O gentle Jesus, let it become for the sick who will be carried on it a comfort on the way, a safeguard in perils, a relief from suffering. Grant that in the company of your angels they may be borne in comfort to the place of healing, and there recover their former good health. Thus made aware of how they have been favored by your mercy and by the prayers of Mary, your blessed Mother, may they return to their homes praising and glorifying you, the true God, who live and reign with the Father and the Holy Spirit forever and ever.

It is a beautiful prayer, one that highlights the compassion God has for the suffering and his desire to heal not only the body, but also the souls of those in need.