Francis offers Mass for the pastors who have given their lives for their sheep: priests and doctors who have died in the pandemic.

Contents hide
1 Francis offers Mass for the pastors who have given their lives for their sheep: priests and doctors who have died in the pandemic.
1.1 An Easter idea

Pope Francis celebrated Mass on May 3, the Fourth Sunday of Easter, also known as Good Shepherd Sunday, for pastors who give their lives for their sheep. He called to mind the “many pastors who in the world give their lives for the faithful, also in this pandemic,” citing the numbers of those who have died in Italy from COVID-19: well over 100 priests and 154 doctors.“May the example of these shepherds, priests and doctors, help us take care of the holy, faithful People of God,” the Pope prayed.

Pope Francis then reflected on the image of the Good Shepherd presented in the readings from the First Letter of Peter (2:20-25) and the Gospel of John (10:1-10).

St. Peter describes Jesus as a shepherd, the one who came to save His straying sheep. By bearing the sins of the sheep, Jesus freed us from sin. Due to Jesus’ death, we have returned to our Shepherd, the “guardian of our souls” (1 Pt 2:25).

The First Letter of the Apostle Peter, that we’ve heard, is a step of serenity. … Jesus is the shepherd – that’s how Peter sees him – who comes to save, to save the sheep that have gone astray. That was us.

St John describes Jesus not only as the Shepherd but also as the “door through which the flock enters,” Pope Francis continued.

Unfortunately, just as Jesus said in the Gospel, many “fake shepherds” have entered to rob and exploit the Lord’s flock. “They are not interested in the flock,” the Pope explained. Their interests have been climbing the ladder, politics or money. But the flock always recognizes who the good shepherds are and who are the robbers, Pope Francis continued.

A good shepherd is distinguished by its flock. A flock flourishes because the shepherd listens, guides and cares for the sheep, Pope Francis noted. The sheep entrust themselves only to those shepherds who are similar to Jesus, the Good Shepherd. In this respect, the flock never errs, he said. Only those shepherds who are “like Jesus elicit confidence in their flock. Jesus’ style must be the pastor’s style. There is no other.”

That style was spelled out by St Peter. Jesus “suffered” for the sheep so we could “follow in His footsteps.” He never returned insult for injury. That is “meekness,” the Pope said. Meekness is “one of the signs of a good shepherd”. If a pastor is not meek, he is hiding something, for “meekness makes oneself seen as he or she is, without defenses.”

A good shepherd tenderly draws near each sheep and knows each one’s name. “He takes care of each one as if it were the only one,” Pope Francis continued. In fact, if at the end of the day, the shepherd realizes that one sheep has not returned, he will go out in search of it notwithstanding how tired he is. “This is a good shepherd,” the Pope said. “This is Jesus.”

Pope Francis called the image of the shepherd, the flock and the sheep an “Easter idea”. He recalled that an Easter hymn calls the newly baptized “newborn lambs”. This is the “Church Jesus wants”, Pope Francis said. “Jesus takes care of this Church”.

Therefore, “this Sunday is a beautiful Sunday”, the Pope concluded his homily. “It is a Sunday of peace, tenderness, meekness because our Shepherd takes care of us. ‘The Lord is my shepherd, there is nothing I shall want.’”

Next ‘Courtyard of the Gentiles’ to take place in Assisi 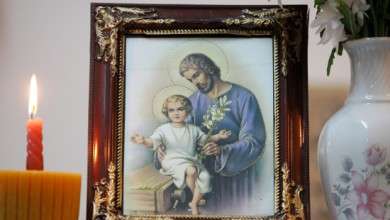